The way to do it

Ryan Noble says it all started in 2001. After watching his friend’s Angus cow herd develop and prosper, he finally had the means to buy the same genetics for his own herd.

“As soon as we can get to Montana to buy some of those bulls, we’re gonna make the trip,” Ryan promised his wife.

Married in 1998, the young couple had lofty goals. Ronella was teaching in a country school 35 minutes away, while he was driving silage trucks, working on harvest crews or artificially inseminating (AI) thousands of cows to pay the bills and save a little on the side. While he was working on whatever he was hired to do, part of his mind was always at home planning the next move at his family’s ranch near Yuma, Colo.

“Ryan didn’t have a paycheck from the ranch for the longest time,” Ronella recalls. “I had a town job, sometimes Ryan had a town job and he rode horses on the side. But we brought things together and things started going in the right direction. So now we are reaping the benefits.”

2001 is the year they made their first trip to buy at the Basin Angus Ranch bull sale. They’ve gone back every year, partly because of the spectacular changes those genetics have brought. The cows are producing. The calves are thriving. Yet the human connection is the strongest.

“Doug and Sharon Stevenson are our friends,” Ryan says. “They reach out to us. They want to know how the kids are doing. We’ll talk about our family and then we’ll talk about the cattle.”

No more is the rancher searching for what changes to make, only continuing progress toward quality.

In everything he does, Ryan pushes the limits of success to what some would call overachieving. To everyone else, it’s no surprise Noble Ranch was named the Certified Angus Beef ® (CAB® ) 2019 Commercial Commitment to Excellence Award winner.

Humble to their core, whatever the Nobles have achieved only comes with the job.

In 1910, Ryan’s great-grandfather stepped onto a train from Nebraska to Colorado. After walking nearly 9 miles, he found a piece of land south of Yuma that moved him enough to file a homestead claim. For more than 100 years the ranch has been under operation by the Noble family, making Ryan the fourth generation. A few years ago the state of Colorado recognized the ranch as a Centennial Farm.

“We take a lot of pride that this place has been in the same family,” Ryan says. “We hope that continues. But it’s also got to be financially stable.”

The family’s only source of income is cow money, so the business focus on growth is essential to supporting ranch and family affairs.

“We’re a business-first family,” Ryan says. “We’re going to get our business taken care of so that we can enjoy our family time. We have our mission and a vision all worked out.”

Ryan’s mom was a teacher, too, so education is a natural priority, with an open invitation to the ranch for any person or group who wants to learn. The vision came into sharp focus when the couple completed a Ranching for Profit course, an investment they say constantly pays its way.

“We’re constantly going through our gross margins and looking at the economics of ranching,” Ryan says.

At the end of every quarter, the family sits down and compares those numbers across the perspectives of cow-calf, stocker, fed cattle and heifer development enterprises to clearly see which ones are economic drivers.

Through that process, the ranch quickly embraced the opportunity for a heifer development program that has made an impact on selected heifers from nearly 6,500 cows in all. It’s a progressive initiative to help Basin Angus Ranch customers reach their maternal and terminal goals through selective breeding and GeneMax™ genomic testing.

“It’s very rewarding,” Ryan says. “We also enjoy interacting with other ranchers, and it gives us an opportunity to have a hand in helping them better their genetics.”

The Nobles haven’t always bred Angus genetics. The ranch looked like a lot of other operations jumping into the Continental breeds 30 years ago. That’s about when Ryan began noticing changes in the Angus breed. He was intrigued.

“Expected progeny differences (EPDs) were gaining momentum,” he says. “I could see it was going to be a very valuable tool. I really believed back in the late ’80s, early ’90s that Angus was going to outpace everybody in almost every aspect of beef production.”

From a young age, Ryan was given responsibility for the ranch. He remembers his father saying, “My dad never let me do anything. I’m going to let you do all the worrying, so you’re in charge.” That’s when the young man realized to reach his goals, he would have to do things different from Grandpa.

When he got the chance to call the shots, he didn’t hesitate to start using the business breed.

“Angus just covers every base that we need covered, and with fantastic results,” he says.

Since 2001, all other cattle breeds were history. Ryan found what worked for their operation, and made it thrive. The bottom line: his cattle must have minimal inputs, along with docility, longevity and fertility.

“Economically, the Angus cow covers a lot of bases for us,” Ryan says. “She can make a living out here in our semi-arid, tough environment. She can use some resources that nothing else is really going to use and she can upscale protein like crazy.”

Average isn’t an option. Their philosophy is to build cattle that are in the upper 25% for the breed. By selecting animals for their best and highly heritable traits, the results are seen in the calf crop and following cow herd.

“We don’t like to leave things to chance,” he says. “So let’s bet on a sure thing and let’s bet on the best thing. Right now, that’s Angus cattle and it probably always will be.”

The carcass quality his herd achieves meets his standards as a beef consumer.

“I look at it on the other side of the plate and all I can think is a beautiful ribeye, grilled medium rare, plenty of marbling, juicy, great taste and very marketable,” he says. “Everybody’s going to leave with a smile on their face.”

Carcass quality speaks for itself.

“The Certified Angus Beef brand has always stood for quality and doing the right thing every chance you get,” he says. “That mirrors what we’re trying to do out here on the ranch.”

Retaining ownership of steer calves and marketing them on the grid proves their strict breeding standards are paying off.

“When I got the carcass data back on our 2018 steers, we crowded 70% Certified Angus Beef,” Ryan says. “They yielded about 63%. They were almost 30% (low) Choice and there was zero Select in the whole pen. That’s on 14 month old calves. The pay weight was around 1340 pounds. I think we’re doing okay.”

The Noble vision, by another name, means treating employees like family or fixing the neighbor’s fence that’s busted. Keeping their word is part of the mission.

That continues past their ranch gate.

“If I sell Tom Williams at Chappell Feedlot a group of calves,” he says, “then they need to be healthy. They need to have all their shots and be preconditioned so they perform for him because I am not interested in a one-time deal.”

Ryan is interested in long-term relationships, sustained partnerships that result in repeat business.

“I believe everything in the beef industry and life in general is all about relationships,” he says. “If you hold up your end of the bargain and the other person does, too, you will have a fantastic relationship and it will work every time. It’s all about the people.”

If you would had asked Ryan in grade school what he wanted to be when he grew up, he would have said, “a rancher.” Even after years of discouragement from people in town and at school, his response never changed. It only solidified his determination.

“Luckily the people that mattered most, my parents and my wife, never doubted that I wanted to be a rancher and that’s what I should be,” Ryan says.

Twenty years ago an opportunity came to expand the ranch. Ryan was apprehensive, but his parents were ready to take the chance.

“The ranch was paid for,” he says. “I asked my parents, ‘Are you sure you want to get back into debt to expand this place?’ They said, ‘Absolutely.’ They had been waiting 20 years for this opportunity. So we took the chance and never looked back.”

The journey has been long and hard, but an enjoyable one nonetheless, Ryan says.

Together, the family’s operation grew from 150 head to the capacity of nearly 1,300 cows. These days, Ryan and Ronella get to watch their children grow and take on more responsibility at the ranch.

“Hopefully they want to come back and raise their families here, but they know they have the freedom not to,” Ronella makes clear. “I hope they have learned the value of hard work, family and raising quality livestock.”

Their son Will and daughter Addie are the fifth generation. Ryan explains the greatest reward is watching his dad work alongside them.

“I’ll look out and I’ll see my dad working with my kids,” he says. “I have very fond memories of myself working with my grandparents. The circle is completed again and that’s a lot of fun.”

They see this in 12-year-old Will preparing the semen during breeding season­—one of the most tedious and important jobs during AI. Or when Addie doesn’t even want to get off her horse at the end of a long day.

“One of the legacies I’d like to leave my children is to do the best you can with what you’re given every chance you get,” Ryan says. “Quality never has to apologize.” 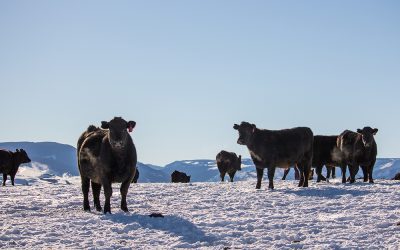 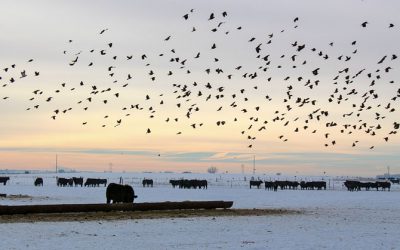 The passing of December holidays signals the end of late-year market popping demand for marbling-rich middle meats. Carcass cutout values for those items shift back towards normalized levels with notable seasonal changes. 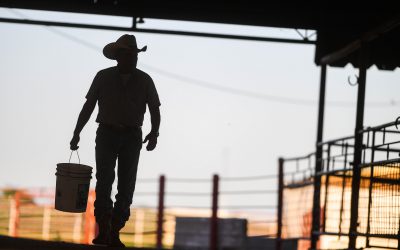 We will never be able to predict exactly how the chips will fall, but if there’s a safe bet to make, it’s to keep it on marbling. It’s the ace in our hand to stack play as a sure predictor of consumer satisfaction.