The fed cattle market average last week was steady on the week prior with a $115/cwt. average on a live basis and $181/cwt. dressed.

Throughput in the packing sector was exceptional again with a 657K head total federally inspected harvest. One should briefly pause to realize that this is the 10th largest weekly head count this year and the 4th week meeting or exceeding this level since the Tyson-Finney County plant fire in August. Beef processors have been able to post larger production than expected for this period but next week will bring on a holiday-shortened harvest schedule.

Tyson Fresh Meats released a newswire bulletin on Monday indicating that their Finney County, Kansas plant will begin to process cattle again at the beginning of December with a goal to be fully operational by the first of the year. This matches up relativey well with the company’s initial projections. 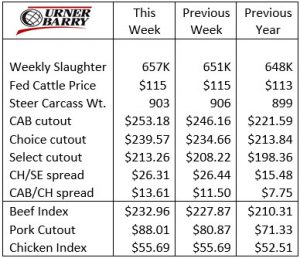 Beef demand is running high and prices are reflective. From a piece count perspective we know that CAB licensed retailers are hungry for product during a period where seasonal demand has inventory already spoken for.

Carcass quality grades and marbling achievement in packing plant coolers continue to underperform compared to a year ago. Regarding the top two quality grade tiers it’s the Choice grade creating the most concern. The past eight weeks of data reveal a 69.1% Choice grade average versus 70.9% a year ago. A USDA data estimated figure suggests a 3.5% smaller Choice production tonnage versus the same period a year ago.

Certified Angus Beef ® brand supplies are challenging as the latest 12-week period shows carcasses eligible for CAB consideration down 1.2%. The disappointing marbling trend of late coupled with smaller Angus-type eligible head counts has the CAB carcass count lower by 3.6% for the period.

Weekly boxed beef cutout prices reached for new highs last week with the CAB cutout posting a $253/cwt. average, nearing the $261/cwt. value seen the same week in 2014. The glaring difference is that recent weekly CAB carcass supply is roughly 44% larger than in the fall of 2014. Product demand is ruling the day.

According to recent data, the number of breeding beef females will most likely be lower than anticipated heading into the new year. In the last edition of the Insider, we mentioned the larger cull cow rate and the pace has heightened in the interim. The week after Labor Day normally sees cow harvest spike in the range of 15-20% higher than the holiday-shortened Labor Day week head counts. A 15% increase was tallied this year but we’ve since seen only further increases.

The cull cow processing flow had been tracking slightly higher than a year ago, but in a very similar pattern with 2018 since May. If the trend followed a similar pattern from early September through this point in November, the weekly total would have been in the range of around 63K head. Instead, cattlemen have culled larger numbers with a 66K head average for that period, while the last three weeks have averaged close to 70K head weekly. 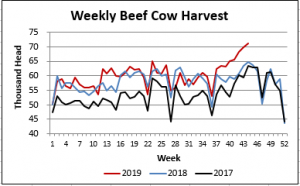 If the packers that normally split their weekly harvest days between cows and fed cattle pivoted to  commit more time to fed cattle in the wake of the Tyson plant fire, it doesn’t show up here in the cow harvest volume.

It is also evident that the proportion of fed heifers harvested this summer and fall has  been aggressive as well. Reports from the country have suggested large numbers of heifers on feed and the disproportionate share of heifers in the fed cattle harvest mix prove this to be accurate.

This divergence has been the case all year with a year to date increase of 7.4% heifers harvested while steers are down 0.4% on the year. This is quite disproportionate in a year where projections have been made for yet another small increase in the cow herd total by January 1st. 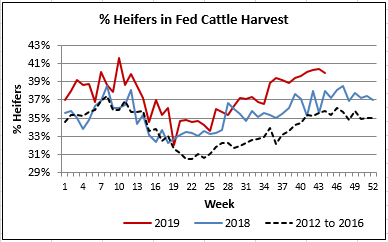 November and December mark the beginning of preg-checked “open” heifers entering the harvest mix in earnest. Several ranchers in the northern plains region have reported larger than normal “open” rates on their heifers this year. Many are pointing to the cumulative effects of weather beginning in the fall of 2018 through spring of this year.

Bringing this back around to a CAB product perspective let’s look at the expanded heifer harvest pace and it’s impact on marbling rates and CAB acceptance. We’ve long known that heifers post higher marbling scores on average than steers.  Even so, the lower marbling trend in place for much of 2019 seems to show no causation between the two factors at face value. Possibly the lamented weather impacts of 2019 have been too much for cattle to achieve their genetic marbling potential. Other possible factors have yet to be revealed.

Another factor in sales gains lies hidden to most in the category of CAB® Prime.

Carcasses of Angus-type cattle that meet all 10 brand specifications and have the extra marbling to achieve the Prime quality grade are becoming a hot item. For the past 4 years Certified Angus Beef® brand Prime product sales have grown 30% on average. In the past year 25% of the brand’s growth was due to increased sales in Prime branded product. 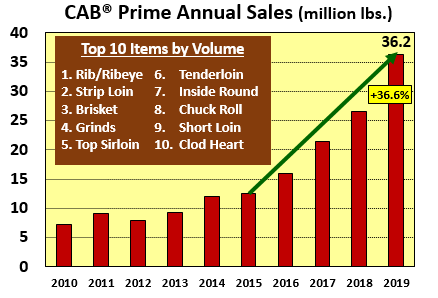 The beef industry’s decade-plus movement toward higher marbling achievement across the fed cattle supply is credited with creating the supply. As licensed end-users observed a more reliable, larger pool of carcasses in the CAB® Prime category many have “traded up” to this most preferred quality of beef. In fact the retail sector saw a 90% sales increase in this category last year.

This week’s USDA Premiums and Discounts report shows a Prime premium that, when calculated on top of the Choice premium, equates to $211 per head over the weighted average market value. This is the premium to the cattle feeder, not just the carcass cutout value the packer receives. End-users are differentiating themselves by upgrading their meat cases to the finest in beef. Cattlemen that meet this demand with the proper genetic input and management are already ahead of the curve with closeouts that break the traditional breakeven calculations

Cull cows and the lean market

Paul Dykstra gives a market update, sharing the fed cattle prices are on a seasonal upward trend. Weaning and shipping have hit cattle country and producers must decide—to sell or retain ownership. Paul breaks down the numbers.

Paul Dykstra discusses the increasing carcass weights of fat cattle and the historic trends behind it. Cattle seller’s are also seeing improvements to the fed-cattle trade.