Science-based ranching in the Superstitions

Politics aside, every sense of “progressive” describes Chuck Backus.

From his 36 years in education and research to the overlapping 39 years in ranching, this former provost of Arizona State University embodies the aspects of applied innovation, growth by accumulating knowledge, experimenting and expanding boundaries.

“With the data available now and all that we can measure, it’s a complex problem,” the retired nuclear engineering PhD and solar energy specialist says. “It’s also a rewarding challenge to weigh all these factors from genetics to cattle health and range conditions.”

That’s Backus, who contacted the Certified Angus Beef ® (CAB®) brand in 2006 to see about transforming his desert cowherd into one that could produce premium quality beef.

Feeding his first steers in Texas that year, he found a benchmark of 48% Choice with one CAB that made it by 1% of a marbling score.

It was the first year for artificial insemination (AI) and what became a key strategy that bred 358 head this spring. Among the 2015-born, 65 steers fed at Cattleman’s Choice Feedyard, Gage, Okla., hit a new high of 95.4% Prime and premium Choice, most of them Prime.

The stunning success gets a smile and nod from Backus, but he looks out across the Superstition Mountains at widely foraging cows and adds, “We still have a long way to go.”

The engineer has already amended the blueprint to put equal pressure on efficiency as the academic footnotes resources and the teacher plans new ways to share results with other ranchers.

These are just a few of the reasons CAB recognized Chuck and Judy Backus and their Quarter Circle U Ranch, Apache Junction, Ariz., with the 2016 Progressive Partner Award at the CAB Annual Conference in Tucson, Ariz., Sept. 22-24. 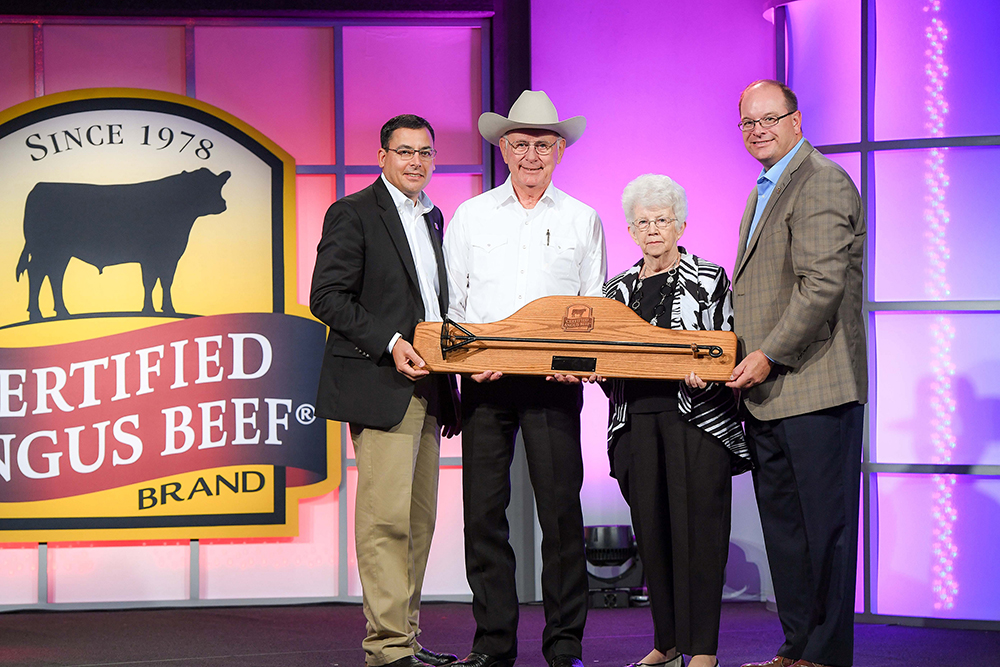 “What Chuck has done and is still accomplishing is truly unique given all constraints,” says Paul Dykstra, beef cattle specialist for the brand. “Identifying genetics as such an important part of beef production is a lesson for others in any environment. But he takes it much farther by not allowing ‘accepted’ limitations to dictate what his cows can produce.”

First, Backus spent 30 years on range improvements for the 40,000-acre ranch, starting on the headquarters east of Phoenix in 1979 to the summer ranch near Show Low, Ariz., acquired in 2000. Ramping up beef quality with Angus genetics became top priority in 2007.

Incredibly, the herd of nearly 400 makes a living on the winter range of cactus and mostly sleeping rattlesnakes from November through April.

“It’s 22 square miles of rocks, cactus and mountains that we call pastures, but we have animals that do well in these conditions,” Backus says. He rides several days each week to monitor that.

Angus bulls brought calving ease, and in 10 years he’s never lost a heifer. Today, increasing efficiency is the key to making life easier for his cows, and more money from feeding their calves.

The American Angus Association publishes an expected progeny difference (EPD) for residual average daily gain (RADG), which Backus looks at along with mature height and residual feed intake (RFI) comparisons. Those measure how much an animal eats each day for the same gain, which can be plus or minus 8 lb.

He aims to use bulls with an RFI of -5 or less because their daughters would need 1,000 lb. less feed per year.

“Think what that would mean for my pastures, my calves and my breed-back the next year,” he wrote in an Arizona Cattlelog article. “If they are all just 10% more efficient, I can run 10% more cows on the same forage.”

Last year’s calf crop converted dry matter at a 6.69 to 1 ratio in 200 days on feed, gaining 3.27 lb. per day. Those are already among the best at his yard, says Cattleman’s Choice manager Dale Moore, who specializes in feeding for natural and non-hormone-treated targets. 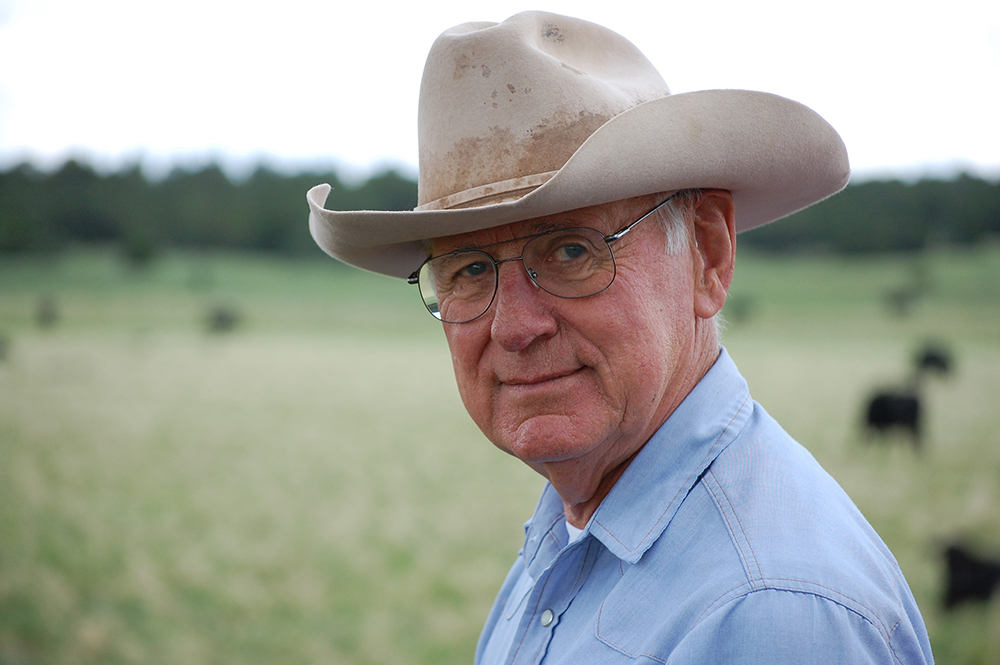 “If you can’t depend on technology like implants and feed additives, you darn well better have the genetics,” he says. Those are often fed longer than average to achieve growth and quality grade targets.

“It works because Prime premiums outweigh the discounts, but only when you know the cattle can do it,” Moore says. He feeds thousands each year that beat 30% Prime, but none from a more unlikely place than that cactus canyon.

“Chuck has taught me not to judge a book by its cover until you have read it at least three times,” he adds.

In an essay on feed efficiency, Backus recently recommitted to quality.

“Ranchers that don’t produce higher quality (marbling) calves are going to be left to compete with the cull cow market as hamburger,” he wrote.

Given the huge Angus gene pool, database and DNA testing all breeding stock as an entrance exam for the past three years, Backus looks forward to continued rapid improvement on all fronts.

For all the precision and planning with land and cattle, Backus cares most about people.

Judy, his wife of 59 years, leads all in traits there. She once ran a real estate business in the Phoenix suburb of Gilbert, which daughter Beth now operates. Daughter Amy and her husband Mike Doyle have a percentage interest in the herd. Son Tony and wife Blanca are also much involved in ranch operations. All live nearby and were in attendance at the award presentation. Quarter Circle U manager Dean Harris and wife Kris, computer records keeper, might as well be family, too, like Casey Murph, head cowboy at the north ranch.

“Ranching relates the person in all of our complexity to the real world, animal and earth kingdom that we live in,” Backus says. “We have come from a million years of gathering tribes to farmers and sustaining communities and civilization.”

Though evolution has distanced humans from their food suppliers, Backus aims to close the gap.

“I have a personal drive to leave the world a little better than I found it,” he says.

You could call that a progressive attitude.