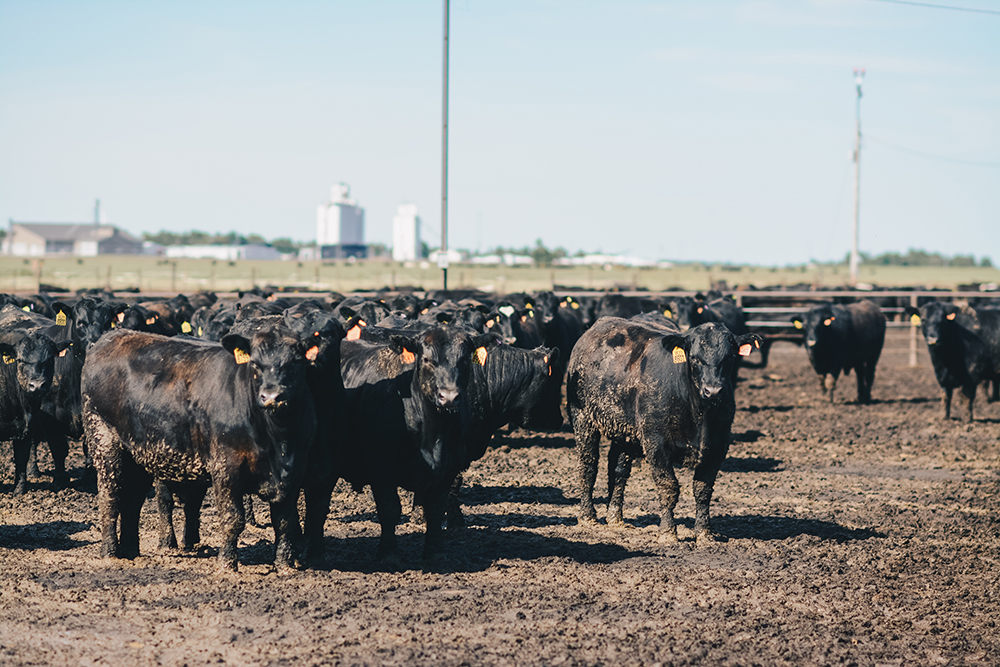 The week’s 662,000 head of federally inspected cattle harvested was  larger, once again, having come off of the holiday-shortened week prior. Fed cattle comprised 80% of the total at 529,000 head, the largest since the first week in May.  Large head counts lay in store this month given the cattle on feed estimates and packer profitability which calls for maximizing output.

On the other side of the coin, steer carcass weights came down 7 lb. over the past two weeks to average 842 lb., which is 6 lb. lower than the same week a year ago. This suggests feedyards are current in their marketings.

From a boxed beef cutout perspective, we didn’t see a lot of change last week with total cutout prices. Moves were barely discernible, as the CAB cutout was a few pennies higher, while Choice and Select were pennies lower. The CAB cutout value is lower today than the same period in the past three years. End users should look at this with a kind eye, and many have been booking product for out-front delivery with 21-day or longer delivery periods. 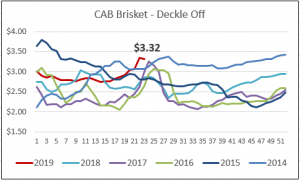 Across the carcass we see continuation of some of the trends in place. Last week the middle meat steak items trended lower again in the spot market.

The last week in May, CAB briskets touched a wholesale price of $3.25/lb, the highest mark since small supplies inflated cutout values in 2014-15.  Briskets are wildly popular this time of year, but the big buying push may end after Father’s Day in seasonal fashion.

The RADG EPD for registered Angus cattle is a predictor of the sire’s genetic ability for postweaning gain in future progeny, given a constant amount of feed consumption. A higher number suggests greater daily gain and efficient feed conversion. 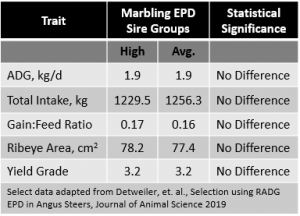 The findings were favorable toward using both RADG and marbling EPDs as indicators for genetic improvement. There were no negative interactions between either of these traits with other important performance and carcass characteristics.

The “high” and “low” RADG steers did not produce differing outcomes in terms of dry matter intake or daily gain. However, residual feed intake, (predicted feed intake based on measured growth) was lower and statistically significant for the “high” RADG steers. Stated plainly, two separate and different measures for feed efficiency showed a positive correlation in the study. The “Gain:Feed” ratio (presented backwards compared to industry norms) was higher (better), but not statistically significant, for the “high” RADG steers and the “high” marbling steers.

Comparisons yielding statistically “no difference” may seem uninteresting at first, but this research shows promise for selection pressure for these traits down the road.

While the scope of this study accounts only for postweaning terminal traits, it provides confidence that selection for feed efficiency can be done without detriment to growth.  Furthermore, using sires that are superior for RADG and marbling did not compromise other important traits. 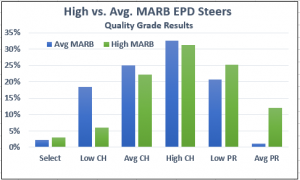 While the actual quality grade outcomes in the bar chart, above, were not the primary focus of the study findings, the data is a nice illustration of the increased premium quality grade achievement in steers sired by high marbling bulls.

Historically we see the proportion of Choice and higher quality grade carcasses in the mix tend to bottom out for the “spring low” in the trend line this time of year.  That’s upon us with the % Choice grade for the week of May 20th dipping to 69%, recovering to 70% the following week but remaining 1 percentage point (ppt.) lower than a year ago for two weeks now. Texas cattle are the leanest by far with a 62% Choice, 3.8% Prime for a combined Choice and Prime total that’s 3.5 ppt. below a year ago for the state.

Similar to the Choice trend, the national Prime grade share is down to 7.18% from the 10% range seen in early March.  However, Prime carcasses remain almost 1 ppt. higher than the same week last year, in contrast to the Choice grade slipping below last year’s figure. The share of carcasses accepted as CAB is running in the 35% range in the May production estimate, up 2.5% versus May 2018. 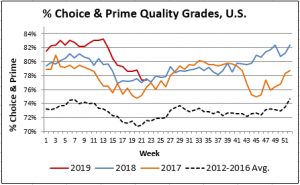 Coinciding with the lower grades, fed cattle carcass weights are finding an even lower spring low than a year ago, with the USDA estimate for combined steers and heifers at 822 lb. for the week of May 22nd, 5 lb. under last year.

All of this information points to a very current cattle supply, as feedyards are staying on top of their marketings while realizing lighter weights than they’d projected, thanks to lingering effects from the winter. The end user appetite for higher quality product hasn’t waned and there’s potential for stronger quality spreads as the Prime/Choice cutout spread has increased by $5.64/cwt. in the past two weeks.

Understanding Value in the Beef Carcass

The Path to 2 Billion