Last week’s trade featured what cattle feeders hope is a trend reversal, with a $1 to $2/cwt. increase across major feeding regions.

The Cattle on Feed Report published last Friday revealed a second consecutive record-high beginning inventory for August and September. The September 1st count in feedlots of 1,000 head or more was up 3.8% over a year ago, at 11.39 million head.

Feedlot placements during August were a whopping 9.2% larger than a year ago. That easily outpaced the finished cattle marketing rate, which fell 3.1% from August 2019.

The market had anticipated most of this, with Live Cattle futures opening slightly lower Monday morning, but rallying hard through Tuesday. It appears that cash bids from packers are higher again early this week and feedyards are looking to flush out this more bullish market sentiment, led by the futures. 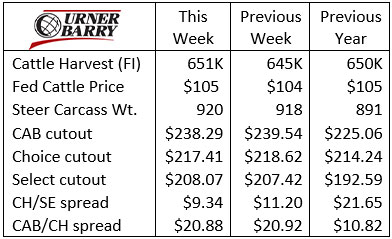 There is optimism on the production side stemming from beef sales expectations as we head into October and the fourth quarter. That’s because the seasonal pattern for increasing boxed beef prices next month is very strong. In the past five years, October cutout values grew to a peak at the month’s end or the first week in November. The market sentiment is factoring this in today, along with current packer profitability (estimated well above $250/head) and smaller near-term head counts of market-ready cattle.

Carcass cutout values normally find a seasonal low in late September prior to the October run higher. Last week, we had mixed pricing across the CAB carcass complex, with ribs moving higher in what may be an early start to holiday buying for premium middle meats. Tenderloins were priced a bit cheaper last week, but still averaged around $2/lb. higher than a year ago. Strip loins are pricing cheaper by the week, as those tend to do this time of year, in a pattern contrary to that of ribs and tenderloins.

End meats are relatively affordable now and we’ll not likely see any demand leaps there for a few weeks, when roasting season is ahead on the calendar.

One of the most powerful trends in the beef business today is the growth in USDA Prime carcass production. To the average beef producer it’s likely a little-known fact that this movement has been quietly underway, especially in 2020.

The year-to-date proportion of Prime carcasses stands at just over 10%, up almost 2 percentage points from the prior year. It has generated a 15% increase in Prime-graded carcasses so far.

Undoubtedly the backlog of fed cattle shifted carcass weights skyward during the past 6 months. Weights failed to seasonally decline by mid-May, headed higher, as feedyards were forced to retain cattle on feed much longer than ideal. This unintended outcome, combined with a modern, marbling-rich set of cattle genetics, brought Prime carcass counts to record proportions.

The end-product side was in no position to reward ample Prime supplies for much of the summer. After all, the 2020 “beef supply shortage” made headlines in April and May. Reaching for the most premium grade in those days was scarcely given a thought, considering the sticker shock on all beef. 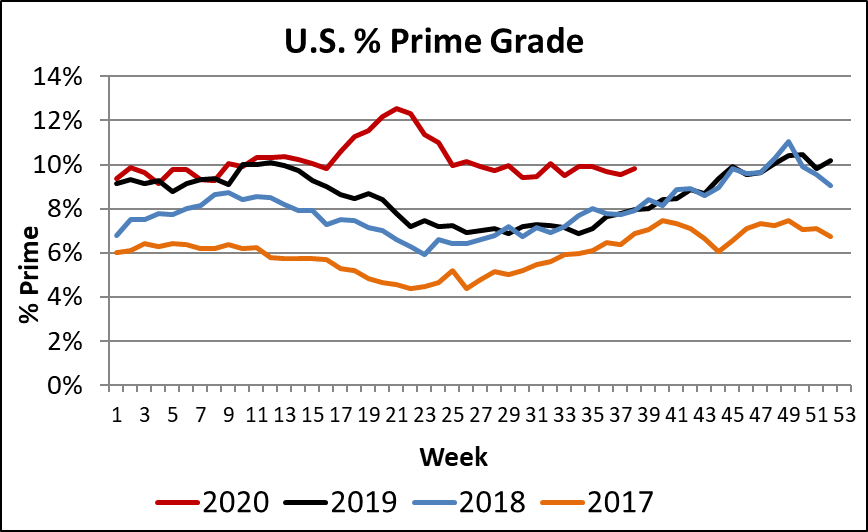 The extended period of retail-only food sales gave way to limited restaurant traffic, but not before some restaurants went by the wayside for good, including notable, high-end establishments. The latter point confused market price signals through much of the pandemic into August.

Studious cattlemen have watched the combined Choice and Prime share rise to 83% of total fed steer/heifer production this year, driven by the noted shift in Prime. Simultaneously, the Prime-over-Choice cutout premium has been exceptionally narrow, dipping to average $8.23/lb. from April through the 3rd week in June, just over half of the 2019 premium for the period. The same trend followed for Certified Angus Beef ® brand Prime, with a similar premium required to upgrade from our traditional premium choice line. 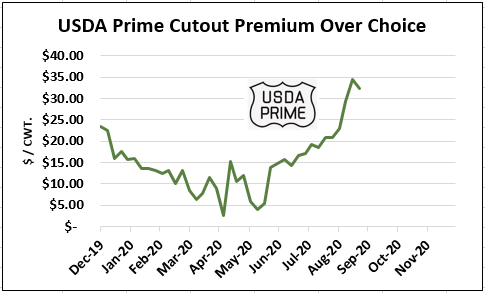 A quick review of the Prime supply trend suggests an overabundance of supply is to blame for the decline in Prime premiums. Yet lack of restaurant business has been far more impactful to Prime pricing nuances, even in the face of record production volume.

Moving into the current timeframe brings the reality of Prime carcass demand more clearly into focus. Since August the Prime cutout has moved into a seasonally stronger position between $20/cwt. and $34/cwt. above Choice.

Weekly steer/heifer gradeout reports continue to produce 10% Prime carcass results in most recent reports. With fourth quarter holiday buying demand already rearing its head, the price signals are pointing up for Prime premiums in the marketplace. Cattlemen should plan on continued development of business around the Prime category, as this is the push that our sales team is making with Certified Angus Beef® brand Prime products.

It’s a long way from the CAB product mix but still important to know what’s going on in the cull cow markets since cow/calf operators derive 20% of their income from cull breeding animals. Two important factors impacting cull cow prices today are very different from a year ago. 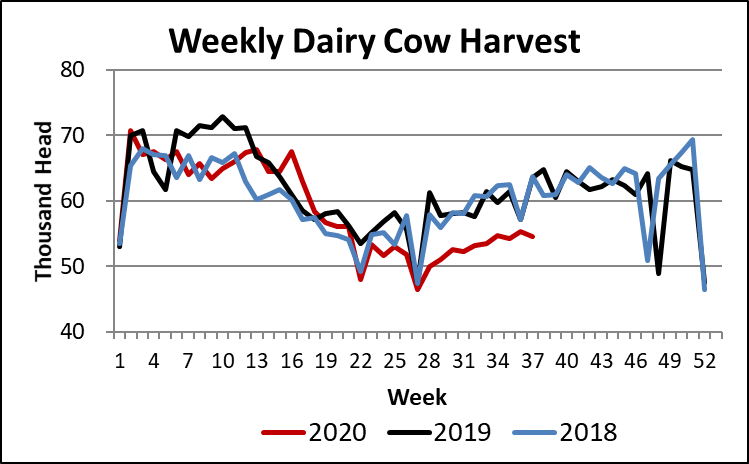 First, the pace of dairy cow harvest has fallen 8% below a year ago since late April. Several factors are likely contributing to this including hampered packing plant production early in this period as well as a surge in Class III Milk futures prices up to $23/cwt. mid-summer. That price has since pulled back to $19.29/cwt. for the October contract, a level that still incentivizes production rather than the herd reduction seen in the prior two years. 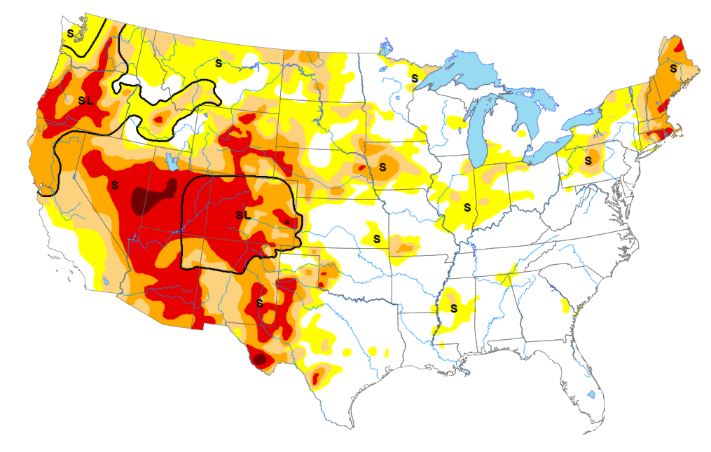 A smaller dairy cow harvest would normally point to higher cull-cow prices for beef producers. However, the U.S. drought monitor map shows an ever-growing portion of the country sinking further into moderate to severe drought conditions. The 2020 beef cow harvest is up 2.7% with most of the year-on-year increase prior to mid-March. A dry summer has carried over to a dry fall for much of the West. This suggests a potential 4th-quarter increase in the culling rate for spring-calving beef cows as weaning and pregnancy testing are concluded and producers make decisions to mitigate feed shortages. 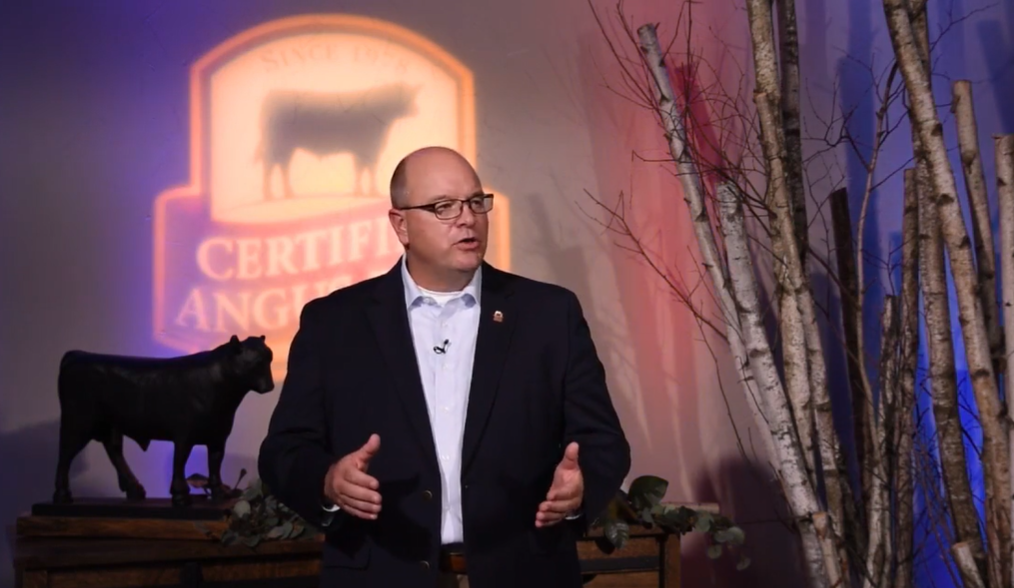 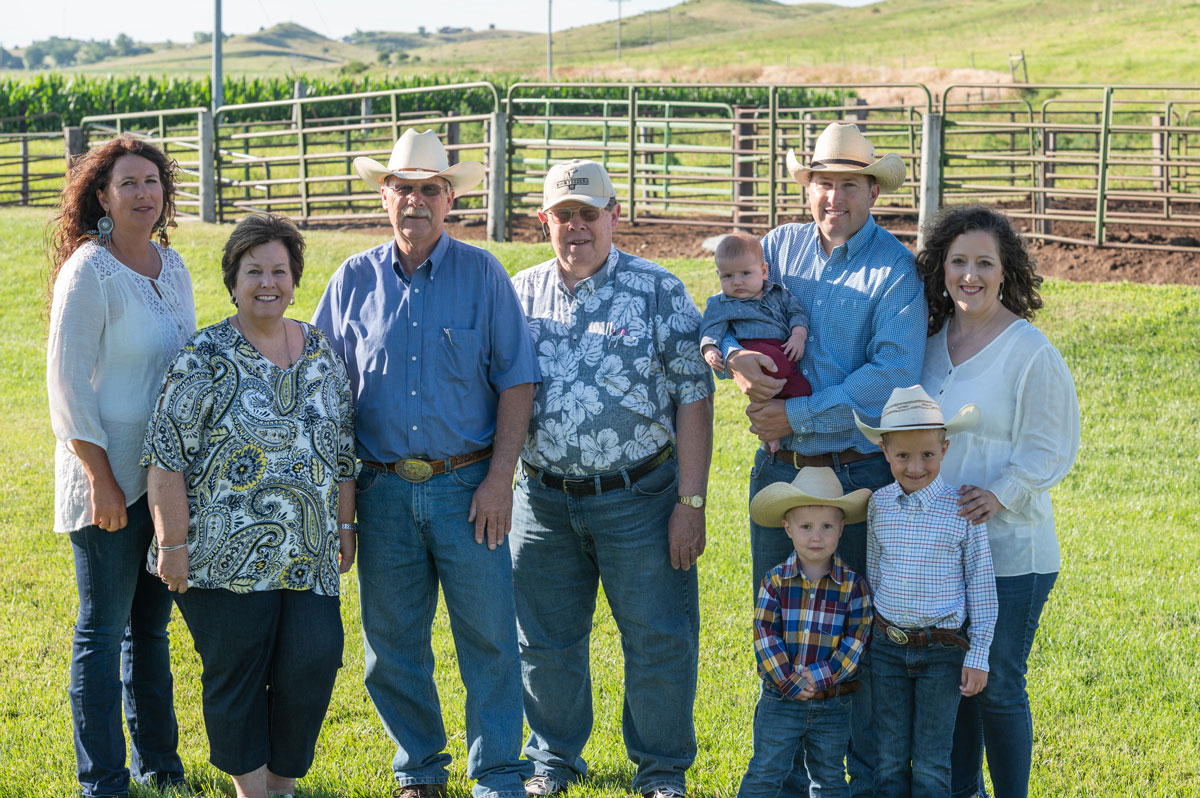 Supplies of market-ready cattle are simply not as burdensome as they were just weeks ago. As a matter of fact, feedyard showlists from north to south across the major feeding states are smaller this week than a year ago.