The market has seen significant changes since our last edition of the CAB Insider two weeks ago. Fed cattle supplies and the total federally inspected cattle harvest have continued to ramp up to a level just short of the volume seen a year ago at this time.

Last week’s FI harvest was 98% of a year ago and the fed steer/heifer total was 97% of a year ago. Fed cattle numbers were bolstered by a big Saturday harvest of 60K head, the second largest of the packing sector recovery, with the largest being a 70K head Saturday only two weeks ago.

As the flow of cattle through packing plants has improved, we’ve seen the inevitable consequences to cattle prices play out. As cutout values have swiftly fallen, so to have fed cattle cash bids. 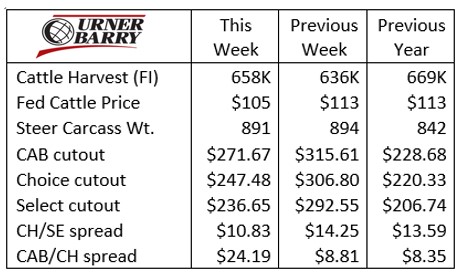 Last week’s $105/cwt. fed cattle average price resulted from a wide range of negotiated prices from $103 to $108/cwt. Some trade occurred early this week at $103 to $105/cwt. The carryover of finished cattle is an overriding factor that will now continue to pressure spot market steer/heifer values through the summer. A slow trek lies ahead toward the 4th quarter, where some relief from excessive finished cattle supplies may be in store, as March and April placements against that period were much smaller than normal.

USDA fed steer values have declined close to 11% in the past three weeks while the comprehensive cutout value has declined 37%. Some packers had a willingness to support the fed cattle market near $120/cwt. for a brief period while their boxed product prices hit all-time highs. Support at that level is now gone with the massive decrease in the cutout.

As we look at the cuts across the CAB carcass complex during the past two weeks there’s been a definitive retreat in chuck and round values. June is a low demand period for many of the lower-priced end meat cuts and as product flow has worked toward restoration the market has reflected more realistic price points.

Some items are now priced below a year ago at this time, an abrupt turnaround from mid-May. The bottom of today’s price range on six end meat items (if briskets can be included) are pricing the lowest they’ve been in 12 months or more.

It’s fitting that we discuss beef sales volume on the heels of the packer production volume highlights. With increased boxed product supplies comes a strong demand from the buying side to secure previously scarce supplies. Undoubtedly, price is the ever-important puzzle-piece which has recently become much more favorable for end users.

The accompanying chart shows last week’s surge in the Choice boxed beef sales for the 22-90 day delivery period. Only two separate weeks in 2020 featured larger sales commitments of this type, the first of which occurred the 2nd week in January which, in recent history, has marked a good price point after the December holidays. The second largest out-front sales week was the week of March 16th, right in the midst of the country beginning to shut down and retailers attempting to load up amidst the onset of consumer panic-buying. 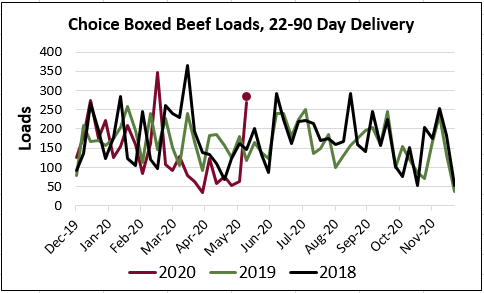 Last week’s big move into the market is clearly a reaction to the unprecedented rise and fall in cutout values. As we have noted for many weeks, retail and foodservice businesses have been in a hand-to-mouth buying mode through the boxed beef shortage. Most have been unable to fulfill their immediate needs up to this point and likely have had little desire or ability to get packers to commit to significant sales for forward deliveries until now.

While it’s intuitive that end users would “buy the dip” as it relates to today’s lower beef prices, they may have done well to slow-play this market. Cutout values in the 2018 and 2019 markets featured a short-term bottom in mid-July before pushing higher into August. The 2017 market didn’t see a stop to declining weekly cutout values until mid-August. 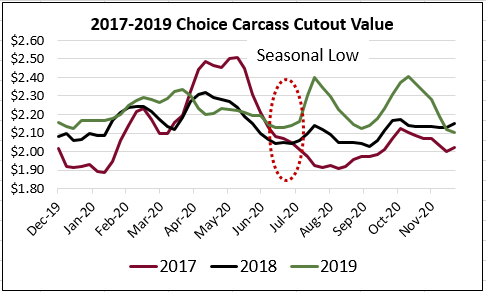 All market forecasts have an asterisk attached in the current environment but it wouldn’t be especially wise to predict higher beef prices into the “dog days” of the 2020 summer, barring extenuating circumstances. Fed cattle supplies are overwhelming and packer margins still leave room for boxes to be marked cheaper on larger production volume.

Combined Choice and Prime quality grades soared not only to a seasonal record but an all-time, modern-day historical record of 84% in mid-May. The trend has stayed near that mark in the succeeding weeks with the Prime grade pulling up the average, up to 11-12% of the total in the past 6 weeks, compared to 7-8% a year ago.

The Choice grade has run plenty high at 71.5% for the period, but is 1.5 percentage points lower than a year ago, giving way to the Prime increase. CAB carcasses are unsurprisingly on the increase as marbling achievement improves with eligible animals meeting the brand’s 10 carcass specs an average of 37.6% of time in the past 6 weeks.

Select carcasses are hard to find anymore at a mere 12% of the total versus 18% for the same 6-week period a year ago. The scarcity of Select carcasses is going to be commonplace for many weeks ahead. 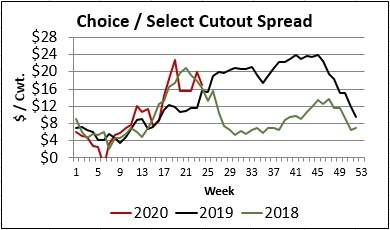 Despite the surge in marbling-rich carcasses some of the quality price spreads remain intact. The Choice/Select price spread is quite strong, all things considered, at $18.30/cwt. in the latest data, roughly $2/cwt. higher than a year ago.

The CAB/Choice cutout spread has been erratic since March, ranging from $10/cwt. to $32/cwt. in a whipsaw pattern. However, packer grid premiums for CAB carcasses have generally followed the spring trend seen in 2017 and 2018, while 2019 seems to be the odd year of the past four. The average CAB premium has, however, fallen back from the spring high of $6.78/cwt. Again, this aligns with the seasonal decline following the “normal” middle meat buying run but so much is different this year that annual parallels are difficult to draw. 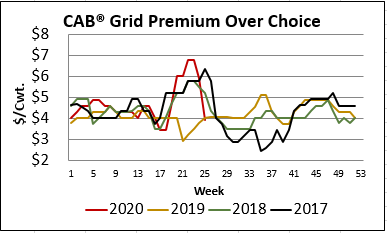 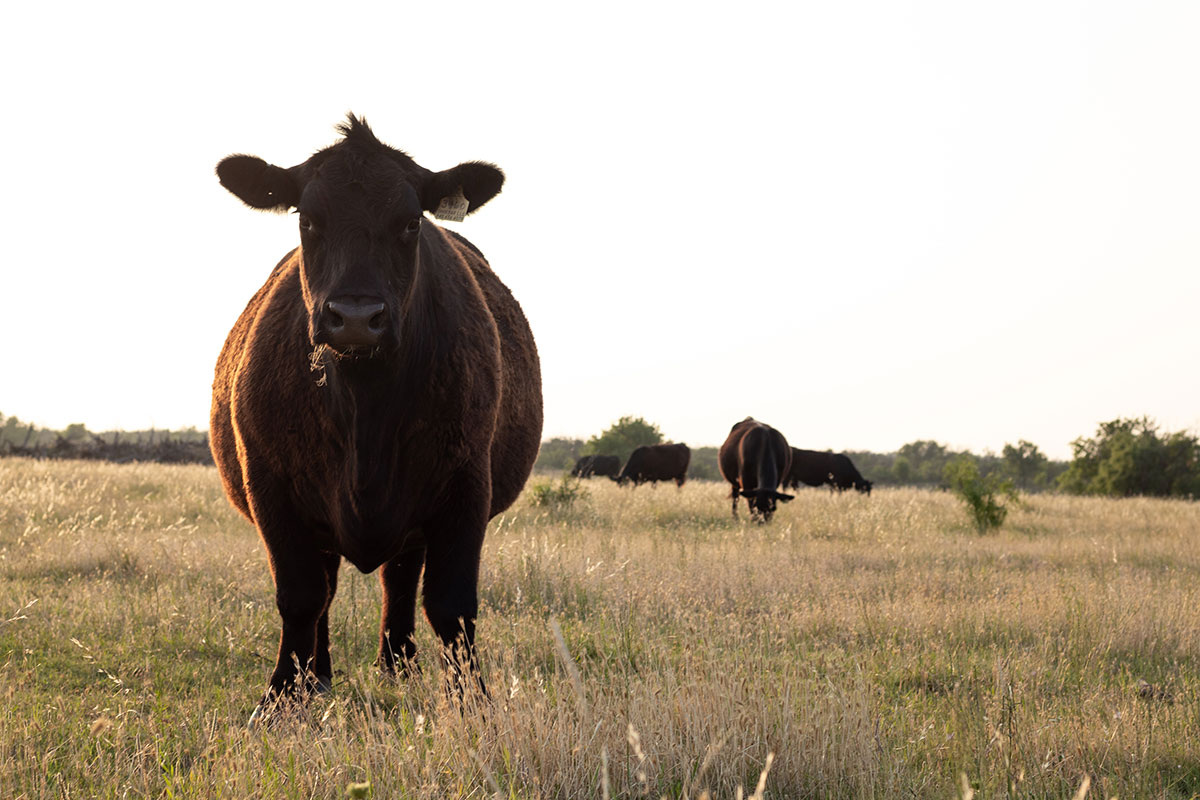 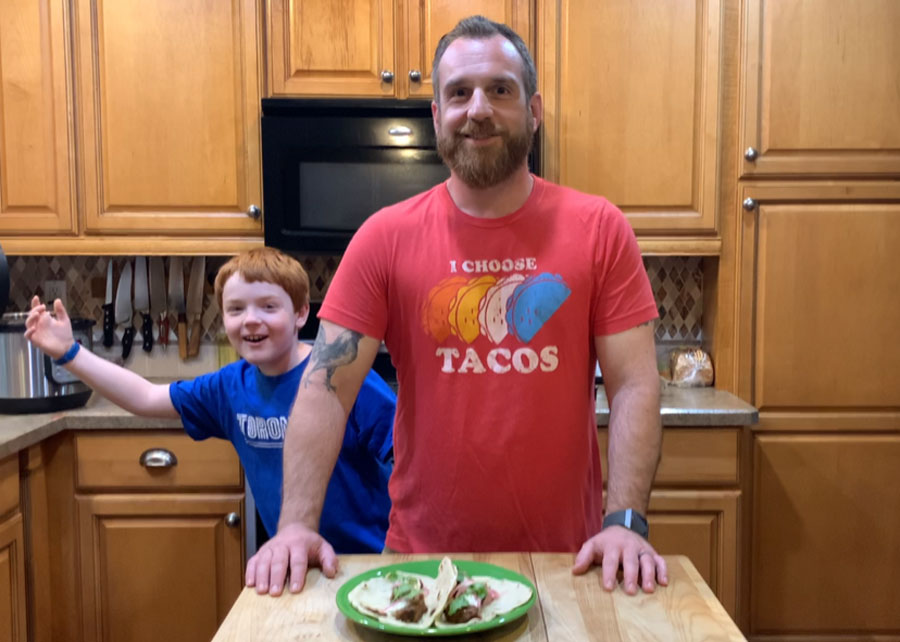 <
< 2019 >
June
>
Month
Month
List
Week
Day
We use cookies to ensure that we give you the best experience on our website. By continuing to use this site, we will assume that you are in agreement.OK