Quality, price higher for beef in 2010

By Paul Dykstra and Steve Suther

“Slaughter cows and bulls were a hot commodity and producers cashed in on those record prices from the spring through the fall,” said Paul Dykstra, beef cattle specialist with the Certified Angus Beef ® (CAB®) brand. He tracks USDA grading trends and harvest numbers in his weekly column, Rearview Mirror on Quality.

“They were a highlight only with regard to timing and the state of the nation’s economy,” Dykstra said. “The elusive $100 target was captured or surpassed one week in October and four out of the last five weeks of the year. Still, the beef market was resilient, to say the least, during a very tough time.”

Strong exports and improved hide and offal values have been credited for some of the bounce-back.

“Corn and other grains faired just as well, so we can’t discount what drove breakevens to new heights,” Dykstra added.

Higher cattle prices did not subdue the packers’ rate of harvest. Federally inspected harvest numbers were up 2.81% year over year. That’s 17,812 head per week, roughly equivalent to the output of one additional medium to large size packing plant—but that is not what happened.

“There were no major facilities added to production,” Dykstra said. “Packers simply kept their chains working more hours and kept the schedules full. But carcass weights were down.”

“Early predications say carcasses will get bigger in 2011 to compensate for fewer available calves and fed cattle,” he noted. “As the world’s foremost producer of corn-fed beef, the quality of the U.S. product is top-of-mind to everyone with a stake in the game.”

From 2000 to 2007, the number of carcasses grading USDA Choice increased only 0.05 percentage points, but 2008 and 2009 brought two years of heavy increases. The Choice share of the annual harvest moved up by 3.37 and then 3.51 percentage points, respectively.

“Stakeholders questioned if this rapid advance would hold or if short-term factors had created the two-year anomaly in grading,” the CAB cattle specialist said. “Extreme winter weather covered the feeding belt in 2009 and the onset of heavy inclusion of distiller’s by-products in feedlot rations coincided with the timeline, as did full adoption of camera-assisted grading by USDA.”

Dykstra said, “2010 may have settled some of the doubts.”

The Choice grade moved higher again, though not as dramatically, by 1.53 percentage points to end the year at 61.4% for all USDA-graded plants. The Prime grade increased a modest 0.17 percentage point, to bring the annual average to 3.15% of last year’s annual fed cattle harvest.

“That small fraction is of little consequence to the commodity masses, but it carves out an advantage for breeders and feeders who care to focus on it,” he said. “Scarcity means higher values.”

USDA grid pricing numbers indicate that an 850-lb. Prime carcass would’ve brought $132.86 above regional fed-cattle averages in 2010, $167.62 higher than a Select carcass of the same weight.

The portion of black cattle, eligible for branded beef programs based on the “Angus type” requirement, was higher again in 2010.

“Data tracking came to a halt in late October, due to USDA system overhauls, but the nine-month trend showed the black-hided share of fed cattle at 63.68%,” Dykstra said.

That’s up 2.34 points from 2009, when USDA first began reporting it. With the combination of more black-hided cattle in the harvest mix and a higher grading trend, USDA shows 25.4% of the Choice-grading carcasses were certified into an upper-two-thirds-Choice branded program like CAB in 2010. That’s an annual increase of 2.24 points.

“Choice and premium Choice beef supplies are at record levels, so we’d expect price per pound to decrease for these two classes on a year-to-year basis, but the opposite is true,” Dykstra said.

Weekly USDA grid price data says packers paid an average of $6.30/cwt. for Choice above Select in 2010, up $1.20/cwt. of carcass compared to 2009. The CAB premium—added to the Choice bonus for qualifying carcasses—also increased. Although individual grids paid significantly more, the weighted U.S. average moved up from $2.71 to $2.78/cwt. At the same time, Yield Grade (YG) 1 carcasses (those with the least external fat) improved 4 cents while YG 4 carcasses were devalued by 3 cents to a discount of -$3.83/cwt.

“The premium for marbling is much lower than it was in 2006, when we had 10% fewer Choice carcasses and the U.S. economy was roaring,” Dykstra allowed. “But, given the uncertainty in our domestic market and the increased availability of Choice and higher beef, the uptick in premiums flew in the face of expectations. The nod goes to quality, where American cattlemen are leading the world.” 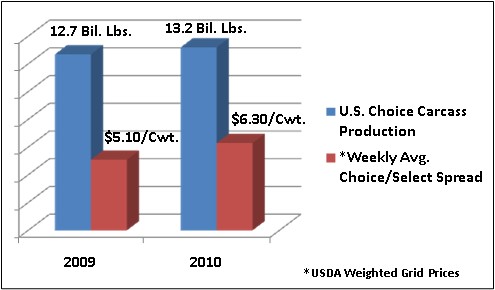