Rewards for hitting the Certified Angus Beef ® (CAB®) brand target have never been greater, even after 11 consecutive years of growing supply.

A survey of CAB-licensed packers Cargill, JBS-USA, National and Tyson showed they paid a record $51.8 million in grid premiums in 2015, and more than $550 million over 20 years.

That does not count the smaller amounts for cattle grading USDA Choice, or the Prime premiums for the hundreds of thousands of cattle that supply the increasing demand for CAB Prime.

The annual 3.6 million cattle accepted for the brand now account for 16% of all North American fed beef, but USDA reported the highest packer premium ever just last November at $10/cwt., and the highest average premium for CAB just last month. It’s all driven by product demand, as the premiums match CAB’s advantage over the Choice cutout value, says CAB President John Stika.

“For a company with the mission of adding value to Angus cattle through our branded beef program, it’s satisfying to see the market working to reward producers, even as they supply us with more product to keep setting sales records,” Stika says.

CAB premiums were barely measurable for the first 19 years, though first noted in the 1980s, but the second half of the brand’s 38-year run shows increasing momentum.

More than half of all grid premiums ever received for CAB acceptance have been paid in the last seven years. More than 41% of cumulative CAB premiums have come in the past five years.

North American cattle are clearly getting better, thanks to a combination of value-based marketing opportunities and enabling genetics, observers say.

“When we do something good, it comes from negotiating the base price for the formulas and grids, and their standing premiums or discounts are on top of that,” he says. “That’s 99% of the time with the big four packers, and all have CAB components in their grids.”

The company markets a million fed cattle per year for feedyard members from Iowa to Texas.

Cobb says Angus genetics have fueled an evolution, especially obvious in Texas. Quality grades move up another step each year, he says, thumbing through harvest sheets of cattle grading 90% Choice.

“Years ago we saw a few pens like that, but now those are becoming the norm: high-quality, good-yielding genetics. And Angus are a big part of that,” he says. “We keep progressing toward that new commodity.” 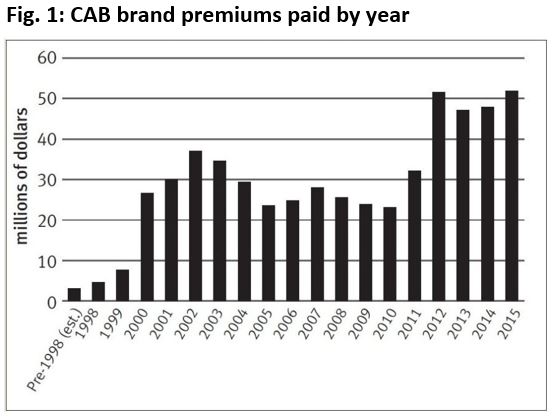 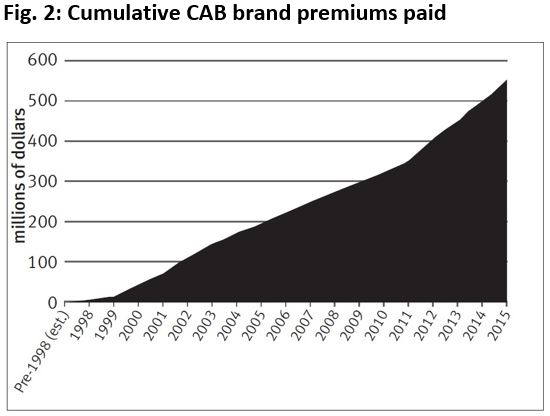 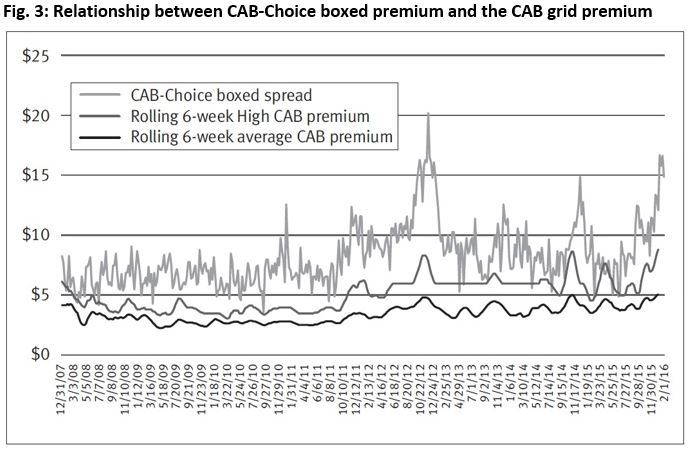 “In these last few years with strong demand for beef, packers were making more allowances for yield grade 4s, and as more producers used grids and formula contracts, they learned to take more precautions to avoid discounts,” he says.

Controlling genetics, health, management and market timing, producers have been able to reap more rewards than discounts, he says while noting a need for more transparency in pricing.

“The premiums all begin with that steak on the plate, and they trickle back through the system all the way to the ranch and to me as a purebred Angus producer,” says Angus producer Jerry Connealy, Whitman, Neb..

“CAB truly is a pull-through demand entity in the market,” he adds. “The commercial guy may not always think about why he’s getting $5 or $10 more per hundred for his calves, but that’s what is pulling it to him. It’s flowing back from the packing plant and feedyard.”

“We’ve just scratched the surface as far as helping them earn premiums,” he says. “Angus genetics bring more at every level from weaning on as you walk on through the market. But I think as we add more information with genomics in our database, we can structure programs that bring them more rewards from the market.”

Mike Kasten, commercial Angus producer from Millersville, Mo., says there is no reason to let up on that selection pressure when the Angus database allows simultaneous selection for other traits.

“The average consumer has never had a Prime steak,” he says. “They love our product but they haven’t even tried our best – just think about how we’ll drive demand forward as we continue to ratchet quality up.”

Drawing on decades of organizing alliances, feeding and selling on grids, Kasten says marbling is one of the best risk management tools.

“Last year was not a good one for profits, but in pens with average per-head losses of $220 or more, we saw profit from those that gained more than 3.75 pounds a day or graded Prime – doing both meant $100 profit,” he reports.

Without using more resources, high-quality premiums can pay another $100 or $150 above the market most years. “That gives you a lot of leeway,” Kasten says, “and it is often pure profit.”

Do the premium math

With the average CAB acceptance rate at 30% some weeks and the average share of Prime cattle now greater than 5%, consider what average cattle can do on a grid if they avoid most discounts.

If the pen moves to 100% Choice or better with 70% CAB that include 20% Prime – which many producers are achieving with today’s registered Angus genetics – then the total premium jumps to more than $78/head, with CAB contributing nearly 39% of that. That’s $5.72/cwt. added to the cash live price equivalent (optional box).