Something was wrong. Robbi Pritchard, feedlot nutritionist and veteran research manager at the South Dakota State University (SDSU) feedlot near Brookings, S.D., knew yearling steers reimplanted just eight weeks prior to harvest shouldn’t grade. Not like the cattle implanted only on arrival at the yard.

“I always thought the marbling went in at the end, and the further you get the implant away from harvest, the better effect on grade,” Pritchard said. “When this happened, I went back and looked at what was going on.”

Of course, Pritchard is always looking at what’s going on. That’s what he does for a living as an animal scientist. But science takes time and funding, and during the 1990s, experimental results were just beginning to shred some of the earlier theories about cattle growth curves, fat deposition and the effect of implants.

“Good cattle are the ones our management system does the least harm to,” he said. “If we have the genetics that work under our management, whenever cattle don’t work, we have to ask, ‘What did we do wrong?’”

When you have that match of genetics and management, Pritchard said, you can play the game governed by “these rules:”

“We do things to play with those priority overlaps in the cattle production stages,” Pritchard said. “We try to grow them out at 1.75 to 2 pounds (lb.) average daily gain (ADG) to get the skeleton to grow as much as possible without adding fat.

“When we feed calf-feds, we push them at 3 pounds per day, when the needed gain for muscle growth is about 2 to 2.5 pounds per day. They’re at the top end of their growth curve and getting some fat deposition. When we bring in a set of 900-pound long-yearling steers or a set of cull cows, we’re out there at the end of muscle growth — we’re just piling on fat, but is it marbling or subcutaneous fat?” 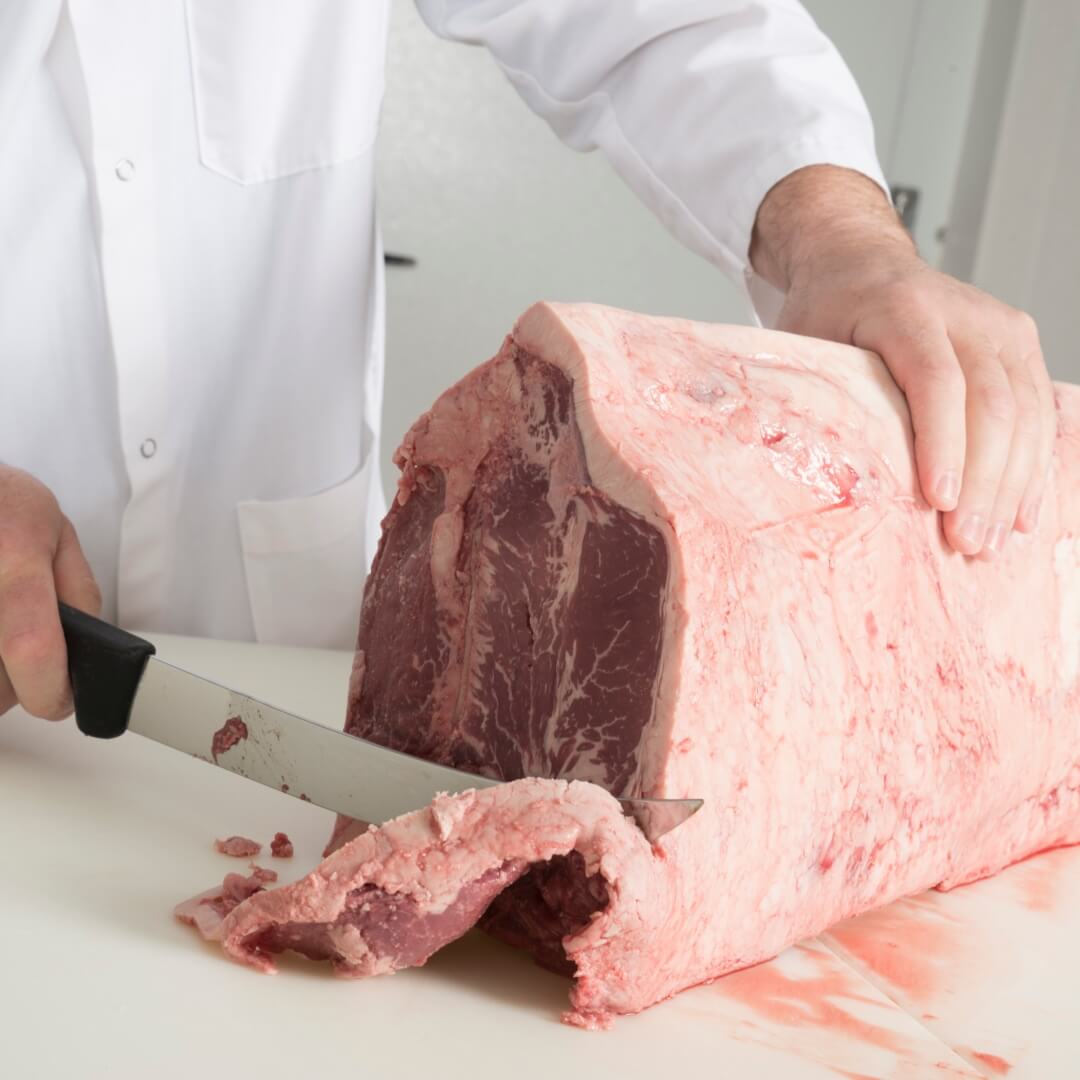 Implanting cattle stimulates lean growth, causing a shift that delays fattening. Aggressive implanting distorts the normal growth curve even further, Pritchard said. You can increase growth by a full frame score, but that may not be a good thing if management and marketing don’t adjust.

Pritchard said beef quality problems arise when implanted cattle fall behind their increased gain potential. In a backgrounding enterprise on stalks, the nonimplanted steer is not growing at his full potential, but he is not as far behind as the implanted steer.

“With a higher level of energy, such as corn silage, diet allows them to be nearer their lean gain potential, and they come off a little bit fleshy,” he noted (see Fig. 1). “The implanted steer here is probably better off.”

At the finishing stage, cattle may move past the lean growth line to where they are just getting fat. Pritchard learned to recognize overimplanted cattle, partly by palpating ears and counting remaining pellets at placement. “Overimplanted cattle gain remarkably less than their lean gain potential — and if you want a set of cattle that aren’t going to grade, that’s the set to own.”

Visual appraisal is a poor means of determining which individual cattle will grade, Pritchard pointed out. Data say the backfat level also fails as an absolute predictor. “Going from zero to an inch of external fat, I was taught that the marbling line should go diagonally, but that’s not what I’ve found,” he said. “It goes flat.” 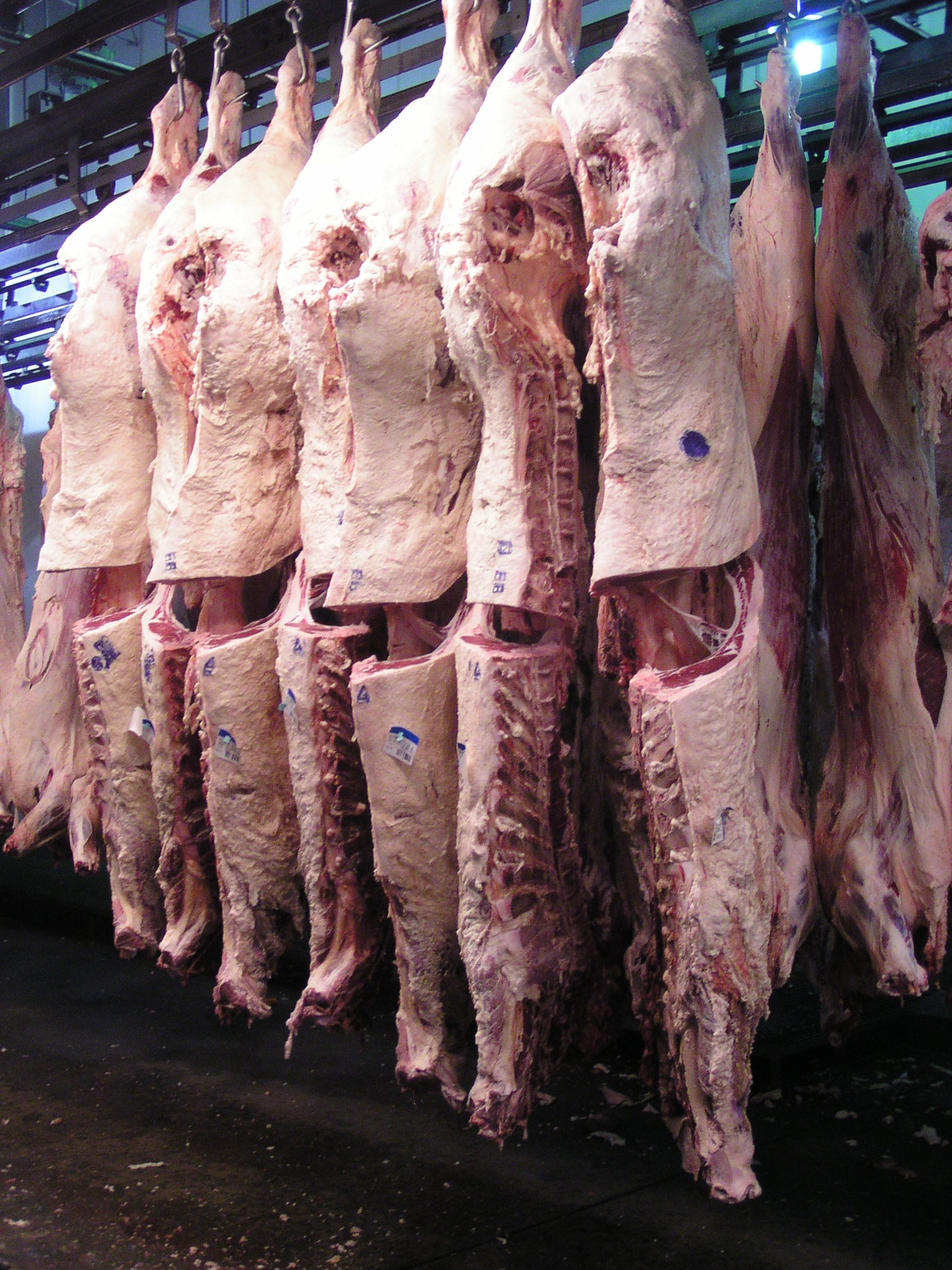 Taking a closer look, Pritchard set up external fat ranges as categories. Sure enough, the marbling line climbed, then it flattened (see Fig. 2). The percent Choice at Preliminary Yield Grade (PYG) 4 was the same as at PYG 3.25.

“As I looked from one population to the next, the ideal was where they flattened out on percent Choice. Whether a given set of cattle can grade 30%, 50% or 70% Choice, they all follow that pattern, flattening out.”

Based on that analysis, Pritchard now aims to harvest cattle at PYG 3.00.

“With that, if they have the genetic potential to grade Choice, they will. Going beyond that just helps catch up the tail-enders, cattle that had a setback for one reason or another,” he explained.

Back to that implant trial that just seemed wrong. When Pritchard saw reimplanted cattle out-grading groups he assumed would do better, he examined net energy for gain (calories) consumed every day divided by ADG. “The higher the calories, the higher the proportion of fat, because there are more calories in a pound of fat gain than in a pound of muscle gain,” he said.

Plotting the quotients, he saw nonimplanted cattle had more energy per pound of gain throughout the period. “After 112 days, they were just gaining fat. These other two sets of cattle with the single implant were beginning to put on fat. The delayed Revalor-s implants were not gaining as much fat out here — but they graded better.”

Still puzzled at first, Pritchard thought about the lower energy intake when the cattle are stepped up on feed. Those starting with more aggressive implants had virtually no fat in their gain at the start, but those started with the light implant gained “almost as much fat as the nonimplanted cattle. The data were saying grade happens on the front end.”

That went against much of the conventional wisdom, so Pritchard was glad when SDSU graduate student Kelly Bruns conducted a trial involving serial slaughter of 90 Angus steers. “He knew the paternal grandsire’s marbling potential and the calves’ birth dates,” Pritchard noted. Harvested at 100-lb. intervals for 400- to 800-lb. carcasses, data were plotted to show changes in marbling and PYG with carcass weight.

It was becoming an acceptable theory, but Bruns continued to test it.

Uniform, black steer calves came into the research yard last October and were acclimated until they reached 650 lb., when the trial began. Dividing them into thirds, one group remained nonimplanted, one received an estradiol-trenbolone acetate (TBA) implant at 650 lb., and the other got no implant until the estradiol-TBA implant at 850 lb.

“The idea was, if you impede marbling on the front end, you may permanently affect quality grade,” Pritchard said. “Whether steers were exposed to implants 95 or 155 days prior to slaughter, hot carcass weight jumped as expected, but marbling scores differed.” The effect was especially pronounced at the premium-Choice level.

“The Certified Angus Beef® (CAB®) and Prime carcasses in nonimplanted cattle were 24%,” he said. “If we waited ’til we let the marbling get started, it was 23%. If we interrupted marbling deposition when they were 650-pound calves, they never got over it, achieving only 8% CAB.”

The implications are far-reaching. Calves grade just as well as yearlings, Prichard said. “When they don’t grade, the problem is we pull the trigger too early. On a calf-fed, flesh does not change very much in one week, but on a yearling it can change a lot in one week (see Fig. 3).

“Looking at the slope for calves, I’m not too nervous about holding them on feed. From 1,000 to 1,050 pounds, the fat doesn’t change as much as it did in a yearling from one day to the next. If we think a calf is getting fleshy at 0.35 [in.] rib fat, we need to have the wherewithal to hold with that calf ’til it has 0.4. If we let it get there, we can get the grade out of it.”

“Remember the prioritization of growth says with older cattle you’re just putting on fat. Remember the rib fat curve heads north while marbling keeps chugging along on a straight line. So when I buy ‘compensatory growth’ in a set of cattle, I slap on a whole bunch of yield grade, but marbling can’t keep up with it. If I implant those cattle, I exacerbate the problem dramatically,” Pritchard said.

He noted tenderness also might be compromised when implanting on arrival instead of on Day 30, after cattle build up intake.

A yearling rumen cannot handle the level of calories required to make older cattle exceed their potential and put on marbling, Pritchard said. “We need to find out what to do in managing older cattle to take care of that problem, the damage done earlier in their lives when they spent too much time on too few calories for the normal intrinsic development of intramuscular fat — or somebody overimplanted them, which is really the same problem.” 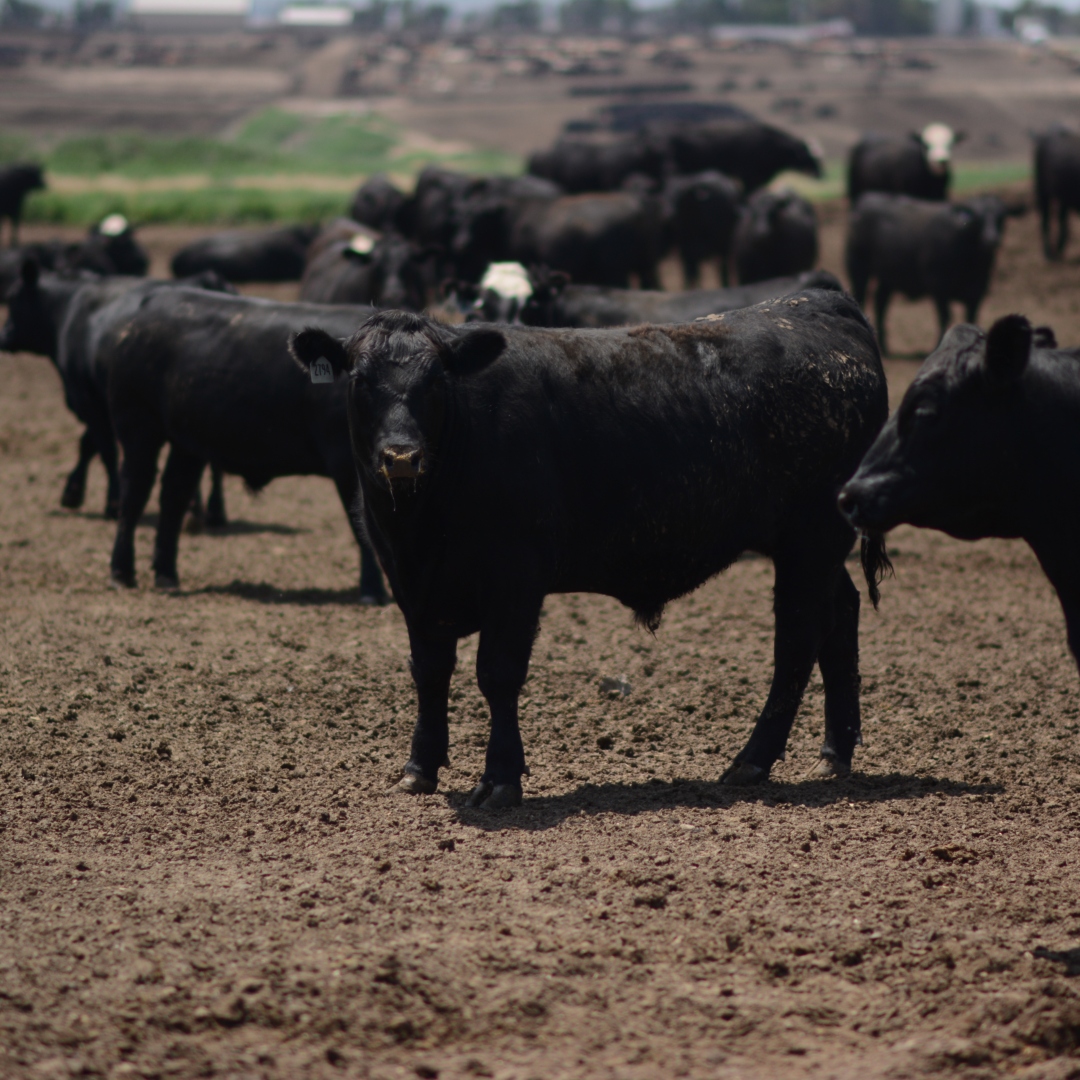 Why should early weaning be an advantage for grade? University of Illinois data compared cattle weaned at 177 days of age, or started on creep from 177 to 231 days, and the control of non-creep-fed, 231-day weaned cattle. The control group, with 1.31 lb. ADG while still on the cow, was far below the normal growth curve, so marbling should not be developed. Postweaning, the early-weaned calves had the lowest ADG in the trial, but in the end, marbling was significantly higher.

“Again, the time average daily gain was out of whack was early, not late,” Pritchard pointed out.

“If you look at data on when creep feeding does or does not affect percent Choice, it looks like it depends on whether the cattle were performing well enough without the creep,” he said. “If they can sustain their normal growth curve without it, creep feed won’t increase grade. If they are below their potential, creep feeding or early weaning will help. But once you’ve blown that, at 5 to 6 months, the damage will be done.”

In the “days on feed” trials going back to the 1980s, higher percent Choice was not a result of longer feeding time. It was due to an earlier start that took care of the growth curve needs, Pritchard added. He created a model from data on 1,775 cattle in seven lots at SDSU (see Table 1).

Pritchard said the early-marbling theory also helps explain why “pulls” and sick-pen cattle typically don’t grade. “When do the pulls happen? Usually early on, right after an implant heightens growth demand, but you have low intake that stays even lower because they’ve been sick,” he said.

“They get behind the eight ball. They’re not depositing intramuscular fat during that stress. If intramuscular fat can’t accompany compensatory gain — and that’s the way it looks to us — that’s where the stage is set. That may be a large part of why respiratory pulls do not grade as well,” he continued.

All of those factors come into play every day in a feedyard. “Remember the growth curve. You can’t have more implant than you have calories or more implant than rate of growth,” Pritchard said. “With a hodgepodge set of cattle, you don’t know how old they are, they don’t all have the same previous nutrition, and the implant can create a lot of problems. When you can combine and get 150 in a pen from one place, done right, you can play with those and pick up a few bucks.”

Cattle feeders are trained to buy potential compensatory growth, he noted. “But every time you buy compensatory growth, you’re giving up percent Choice. The models say you don’t get to have it both ways,” Pritchard concluded. “Anything you do to delay the onset of marbling is going to cause problems. Later on, the yield grade is going to climb faster than the quality grade. Mishandled cattle and older cattle appear to be the most susceptible to this problem.”

Ideal growth curves to prevent problems have not been described, but for now producers can use retained-heifer development as a barometer for steers, he added. “If the heifer contemporaries will reach puberty on the farm with a normal ration, you probably did no harm to the steers prior to their placement on feed.”