Marbling in cattle—the taste fat—was long considered the feedlot’s responsibility, until research pointed to opportunities all the way back to the ranch. Genetic potential is a key, and deposition of this intramuscular fat links to management decisions much earlier than those final months on feed.

In one of those critical points, a 60-day window before and after weaning, fat cells undergo a transition from increasing in number to growing in size. Decisions can affect both number and size (see Figure 1). 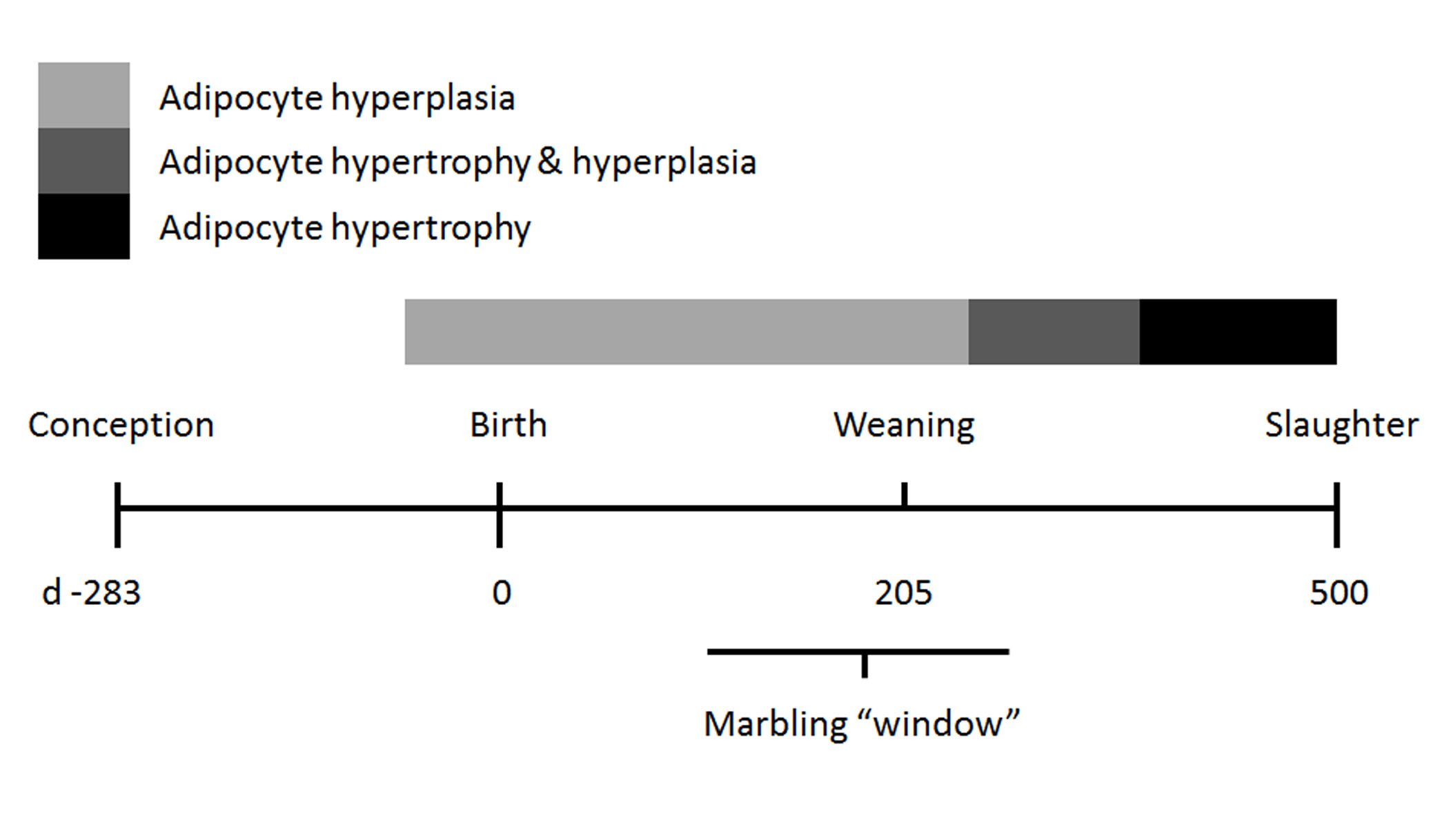 Jason Ahola, Colorado State University animal scientist delves into the details in his recent whitepaper, “Effects of the 60-day Window Around the Time of Weaning on Subsequent Quality Grade and Eating Quality of Beef,” available at www.cabpartners.com/research.

The full-scale analysis found marbling deposition can be influenced by diet and management during the window from pre-weaning through about 250 days of age. As a known time when fat deposition processes may be altered, those 60 days represent an opportunity.

The fact that weaning is the most stressful event in a calf’s life underscores this period’s critical nature for marbling deposition. Ahola’s paper covers a wide scope of influencers from nutrition to low-stress weaning, creep feeding, mineral supplements, castration, implants and weaning time.

He found two main practices with a proven positive impact: early castration and weaning early onto a high-energy diet.
Nearly all producers castrate male calves, but not all may realize research shows the earlier calves are cut, the better their carcass quality and value in grid marketing.

Those who wean early may not think about enhancing calf value or carcass quality, but weaning at 100 to 150 days of age (compared to the industry norm of 205 days) has been shown to improve marbling if weaned onto a high-energy ration. In turn, the probability of reaching Premium Choice or Prime is greater in early-weaned cattle according to several studies, but overall profitability of this practice over conventional weaning has not been studied says Ahola.

At any rate, the apparent advantages do not consistently hold true for normal weaned calves, for which starting on a high-energy ration has no impact on later carcass merit. However, they do perform better than late-weaned cattle.

Studies have shown quality grade and back fat are not affected by late weaning age and data does not suggest a negative impact on carcass quality. However, cattle placed on feed earlier such as early-weaned or normally weaned calves have greater marbling than those placed on feed as yearlings.

In addition to early weaning, placing calves onto a high-energy diet immediately after weaning allows favorable marbling changes to occur, the research says. Providing high-energy diets to calves at a young, less than typical weaning age, enhances deposition of intramuscular fat, more so that simply weaning at an early age.

To harness the marbling genetic potential of the Angus breed, Ahola points to a combination of practices at the cow-calf level that create a low-stress environment for calves.

His recipe includes tactics proven to enhance marbling as well as strategies that have at least some evidence of a positive impact through reduction of stress.

Beyond prompt castration and early weaning onto a high-energy diet, Ahola found low-stress management such as fence-line weaning or use of a self-weaning nose flap, in combination with a vaccination program, worming, and mineral supplementation can help with marbling.

While not all of these practices have proven scientific links to marbling, several large studies have shown a link between treatment rates for illness and quality grade or marbling. The more times an animal must be treated, the more detrimental it is to intramuscular fat deposition.

“Set cattle up in such a way that they are considered to be low-risk cattle at weaning,” Ahola recommends.

Regarding growth technologies around the time of weaning or branding, research shows implants do not influence marbling deposition. However, giving a steer more than two implants over its lifetime has had negative impacts on end product quality.

The industry continually struggles to meet a growing demand for highly marbled beef, but Ahola suggests one answer is an increased management focus on promoting intramuscular fat deposition prior to the feedyard phase.

“Our industry currently is under-supplying highly marbled beef to consumers,” he says. “If we are going to be more profitable and if we are going to provide our consumers with a better product, we need to increase the average marbling of our cattle.”

Research shows the way to cow-calf producers, through a marbling window to higher profitability.