It may be easier to explain away why you don’t have marbling in the herd than it is to get it.

Some say that’s the origin of the popular “urban legend” in the Angus breed: high marbling potential is for “terminal” cattle, because they don’t make good mamas. You can’t have both in the same herd.

But you can, as more and more commercial Angus herds across North America are proving with data and profit. Recent research suggests any theories to the contrary were simply created by those who have not made much effort to select for carcass traits and thus describe their herds as “maternal.”

Marbling has a slight relationship “with most of the traits that we associate with cowherd productivity,” Greiner says (see Table 1). Terminal and maternal traits can “coexist.”

The first step to building a productive cow is to get her bred and bred early, and scrotal circumference is an indicator of fertility 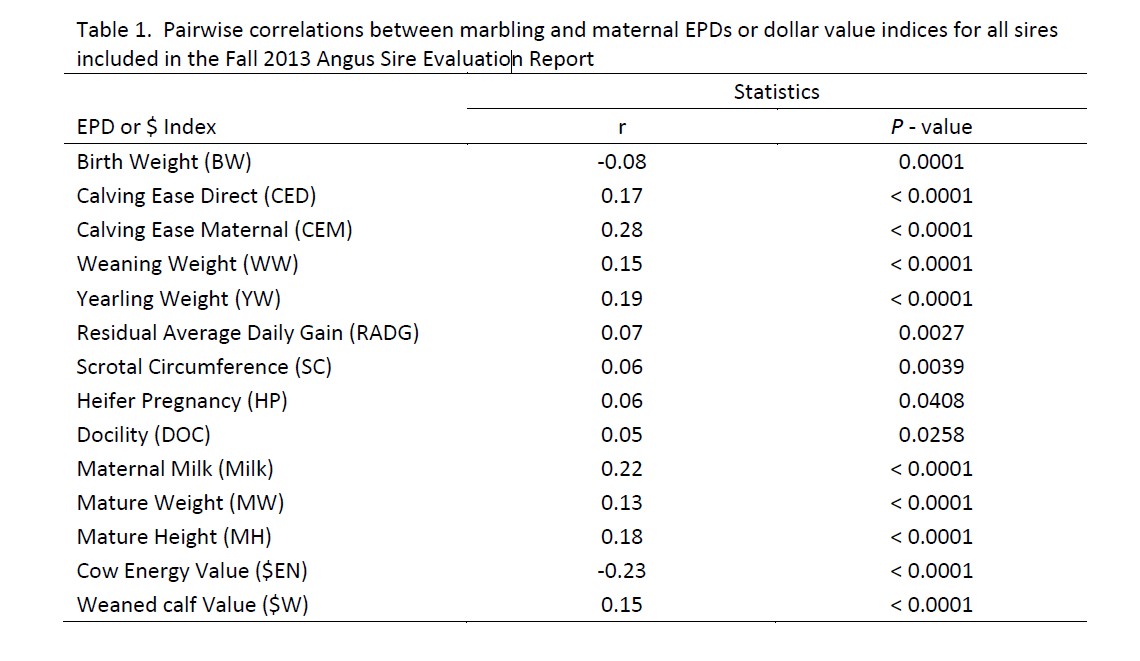 The first step to building a productive cow is to get her bred and bred early, and scrotal circumference is an indicator of fertility.

Decades ago, some fairly popular and high-marbling Angus bulls happened to score low in that indicator, but that was just coincidence, according to all evidence.

Both small-scale studies and actual analysis of the expected progeny differences (EPDs) for marbling and scrotal circumference found no association between the two traits. Nor should marbling ability impact the onset of puberty.

“Age at first calving” is often used to determine if a female will get pregnant during a normal breeding season. One study indicated no relationship and another said an increase in a full unit of marbling would extend age at first calving by 10 days.

“A breeder that makes a 0.25 unit improvement in marbling EPD would be expected to increase age at first calving by less than three days,” authors Greiner and Smith state.

There is no correlation between marbling and heifer pregnancy in the Angus database.

“Angus sires are highly sought after amongst commercial producers due to their ability to excel at calving ease while they maintain or improve carcass traits,” the paper says.

The Association’s data shows there is a positive correlation (.22) between marbling and maternal milk.

“This is always important, whether you’re selecting for marbling or not: keep milk production at a level that’s appropriate for your environment and your management,” Greiner says. “Opportunity currently exists within the Angus sire population to select for marbling while divergently selecting for maternal milk.”

The scientists found no evidence of increased calving interval or reduced stayability among high-marbling populations, but research on mature cow size and efficiency is less clear. High-marbling cows may tend to be larger and slightly less efficient. The cow energy dollar-value index ($EN) has a minor negative correlation with marbling at -.23, but the marbling EPD is positively correlated with residual average daily gain (RADG) and the weaned calf ($W) index, “suggesting a favorable relationship between marbling potential and both pre-weaning value and post-weaning gain efficiency,” the paper says.

Using EPDs and indexes to match cattle to environment is key, but reports from the American Angus Association indicate producers do not often utilize those tools to regulate mature size.

Greiner says breeding for maternal traits takes much longer to see marked improvements since they’re lowly heritable and environment is also at work.

Dick Beck, Three Trees Ranch, Sharpsburg, Ga., says that’s why it is so rewarding to focus on both.

“Of course we should keep working on the cowherd, but why would you walk away from making progress on a trait that’s easily improved?” he wonders.