Federally inspected weekly slaughter has fallen in the past three weeks 20,000 to 25,000 head below late February and early March levels. Cooler cleaning and plant maintenance is the primary factor for the smaller head counts. Setting aside the March 2020 inflated slaughter pace, the current weekly slaughter numbers for the month of March are much higher than in 2018 and 2019.

Live Cattle futures were locked in a firmly positive mode six of the past seven days, with the April 2021 contract up $2.40/cwt. Considering that cash fed cattle prices held steady at $114/cwt for a seven-week stint, the futures action is considered very positive to the market. April will begin with the up front Live Cattle contract premium to cash. Early this week the futures gains stalled after a reasonable number of consecutive days to the upside. 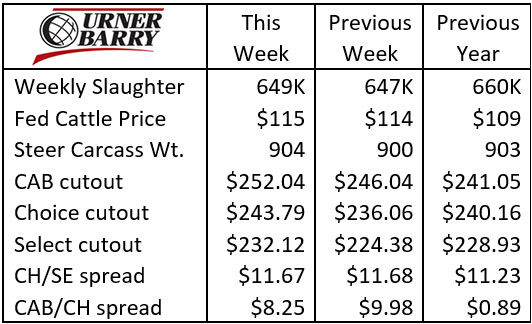 Wholesale boxed beef prices are providing support to the fed cattle bias toward higher prices. The CAB cutout price jumped $6/cwt. while Choice was up $7.73/cwt. with Select up $7.74/cwt.

The narrowing of the carcass quality spreads last week was seasonally expected, but the direction from now through May or even June is anticipated to see the spreads widen. Quality grades should seasonally decline into this period while spring grilling demand builds with warmer weather.

As we move lower from record quality grade levels in the first quarter, it will be interesting and indicative of the resilience of demand for the period. 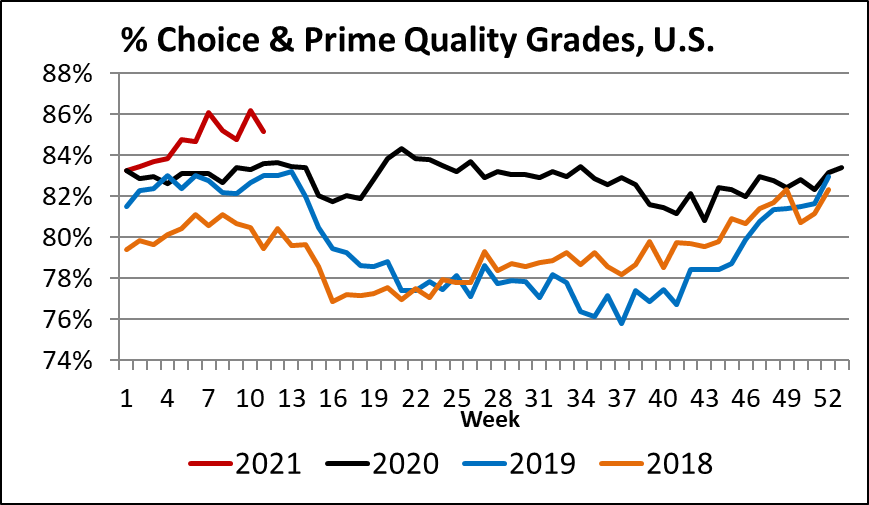 Since 2015, weekly industry Prime grading percentages have steadily climbed, breaking from the traditional and trustworthy 2-3% of total production volume seen for years on end.

Fast forward to 2021, as 1st quarter Prime carcass supplies ran to a record high with nearly four times the share of the total fed cattle volume seen a decade ago, capturing 11% of production.

Fallen restaurant demand for Prime beef during the pandemic pinched Prime carcass premiums last year to 80% of the 2019 total. Yet the Prime category remains increasingly relevant to the marketplace. How can this be the case in a time when current foodservice business remains lower by nearly 25% of normal?

Increased retail usage of Prime cuts has been a noteworthy trend since before the pandemic. Certified Angus Beef ® brand Prime sales at retail have increased 30% during the past four years, with the high point of 35 million pounds sold in 2019. An understandable setback in 2020 dropped the total to 32 million pounds, with the loss of foodservice business.

Of relevance to cattlemen is the behavior of the Prime grid premium so far this year. Against the backdrop of record large Prime supplies, 14% in the first 10 weeks of the year, the USDA-reported Prime grid premium is 23% higher for the same year-on-year period.

Recent years have featured cheap corn prices relative to the price of fed cattle. Costs of gain in the range of $0.75 to $0.85/lb. of live weight gain have incentivized increased days on feed. The 2020 backlog aside, several incentives have pressed feeders to cheapen up their cattle cost through longer feeding periods. These include improved genetics, higher feedlot in-weights and improved growth technologies, to name a few.

As we move forward in 2021 some of the dynamics are different than described above. Costs of gain are now much closer to live cash cattle prices. Diminishing profitability (incremental cost of gain) toward the end of the feeding period will likely cause feeders to ship cattle at lighter final weights than in most recent years. The potential to see lower quality grades compared to a year ago begins to enter the picture under these conditions, especially if the cattle basis becomes par or positive, pulling cattle forward into the marketing timeline. So far we’ve only seen higher grades, but potential for lower exists.

Should this suggested scenario take shape, then Choice, CAB and Prime premiums stand to be more aggressive than we might expect based on recent seasonal tendencies. Demand for quality is good, based on elevated quality premiums in the past year. The advantage will potentially be back in the hands of feeders with genetically higher-marbling cattle, rather than cattle that must be highly managed through the feeding regimen to reach the premium grades and CAB.

Middle meats back in the drivers seat

Nuances from the end-user might seem trivial from the production side. Yet current boxed beef price action is indicative of what’s ahead for the spring season.

Middle meats made an unseasonal run to mark new record highs for the month of February, a few weeks ahead of normal. The magnitude of ribeye, strip and tenderloin price increases is only explained by resurging demand from some return of foodservice business and retailers making short-term orders. Smaller late February fed cattle slaughter levels definitely factor in to these price increases, since packers had fewer carcasses at hand to supply pre-ordered product. 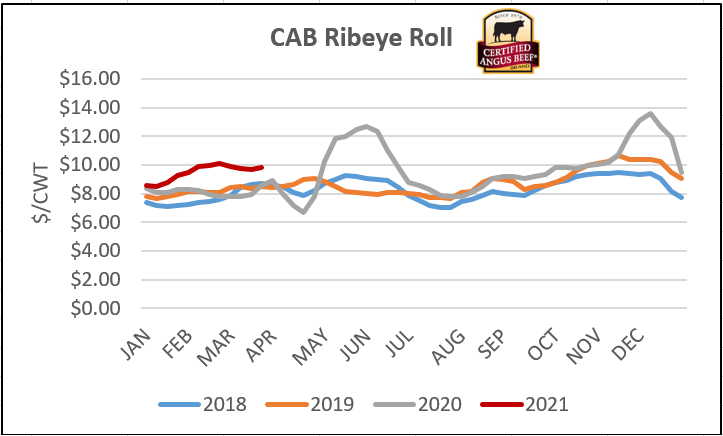 Looking toward spring demand, the signals are robust. While middle meat prices took a break in early March, they’ve surged higher again last week, indicated further early spring demand for premium middle meat cuts. Retail and foodservice businesses had hoped for a longer, deeper price break, but the likelihood is that the break was brief and shallow.

Spring beef buying is underway and it’s unlikely that another significant price break is in the cards. April normally brings on the active buying season and widening price spreads for quality. We’re out of the gate early as April arrives and there are few indicators that a turnaround is a threat to cutout values near term. 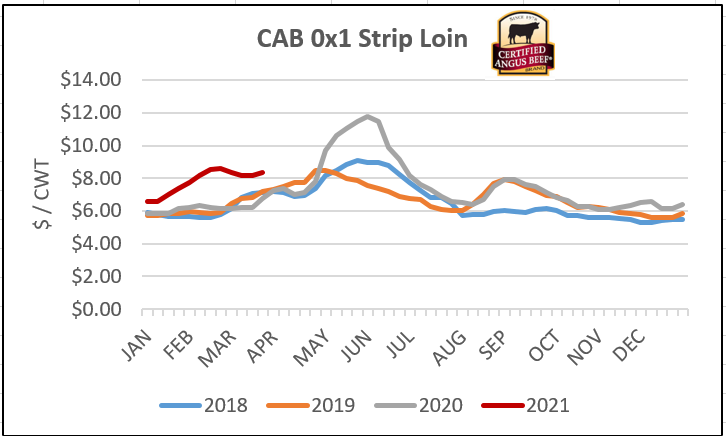 Looking ahead to marketing spring calves

The shift away from larger availability of yearlings to the new crop of spring 2020 calf-fed cattle is beginning. This is the early stage of this seasonal trend, with more to come as April progresses.

The Choice/Select spread and CAB/Choice spreads narrowed in last week’s trade as ribeye and strip loin prices fell. Higher than normal first-quarter middle meat prices were responsible for some of the wider quality price spreads since the first of the year.