It takes grass to grow grass on the foundation

If you’ve built a powerhouse cow herd, its best fueled with robust grass.

That’s why management needs to adapt quickly to uncontrollable changes like drought. Record keeping and monitoring are key.

“Carrying capacity changes from year to year or season to season based on moisture and our pasture management,” he says. “The better we manage, the more opportunity we have for production.”

Monitoring carrying capacity throughout the year helps determine where adjustments should be made to stocking rate.

It’s a supply-and-demand relationship based on what the pasture produces and what the cattle need. 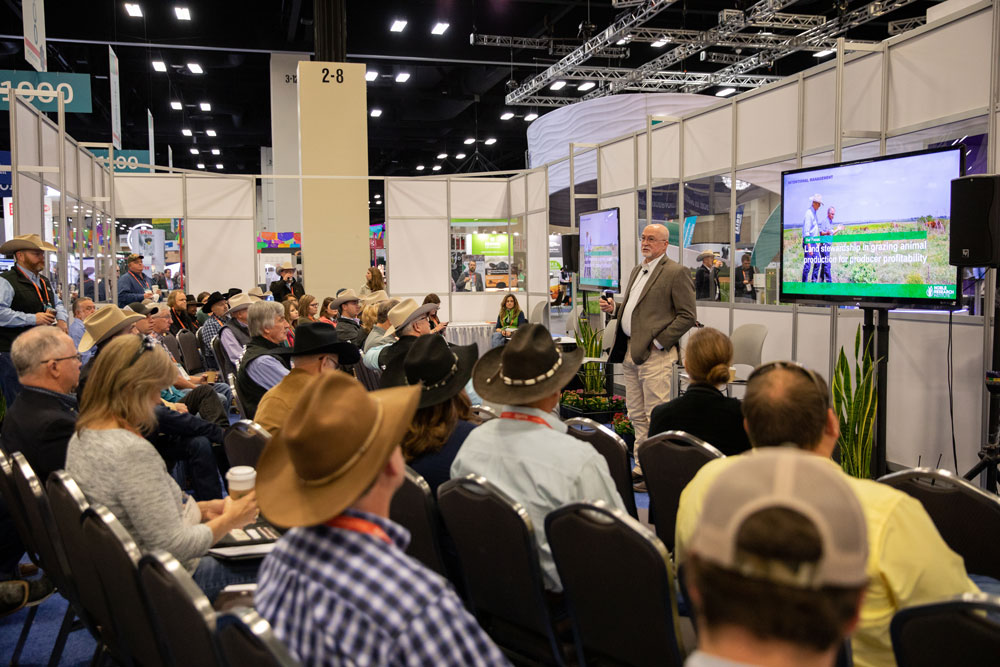 Across the country, rainfall varies in amount and timing, which affects growing patterns and pasture management.

The first thing Aljoe looks at is historical annual precipitation. Start by studying rain at the end of the growing season in October “when the water begins to recharge the soils,” Aljoe advises.

By the end of March, the Southern Great Plains should already have 40% of its annual rainfall, he says. The amount of precipitation accumulated in the soil will determine whether it’s going to be an early or delayed spring.

Regardless of where a ranch is located, 30% to 35% of annual forage production should occur by the end of May. That increases to 65% by the end of June when the water year rainfall should reach 65% to 75%, Aljoe says, referring to water-table records.

“If we’re not there in the spring, we’re probably never going to catch up,” he says. Livestock can have compensatory gain, but unfortunately pastures are limited.

Another important component is variance, or how much rainfall is normal, positive or negative? Small differences are less critical than those above 10 to 15 percentage points.

Aljoe shares one example when forward-looking management saved the ranch. Charting a major drought as it developed in the spring, management at the typically 1,000-cow ranch sold down to 700 head before major downward price pressure. By September, those pastures stood out for not showing much drought stress.

“The land resource was maintained,” Aljoe says. “That’s what is possible when you use the water table.”

“Take half, leave half” is a good starting rule, but grass growth rate and forage type help set rotation plans and grazing-pressure thresholds.

“In the South there’s Bermudagrass or fescue in the North,” Aljoe says. “On those introduced pastures, we can take as much as 50% to 65% of the production every time we graze, because they’ll recover rapidly. On the other hand, on native range pastures we only want to take 25% at best.”

“You want to rate it on a system where there is no middle ground,” Aljoe says. Even numbers make it easier to see if land needs improvement or maintaining.

Building small exclusion plots with wire panels and T-posts is another way to monitor the amount of forage grazed.

“We never want to take more than half,” he says. “And in the early growing seasons, we don’t want to take but the top third in a good grazing program.”

During the dormant seasons, some cattlemen like to make cattle “hustle,” eating what’s probably better left as residual ground cover, Aljoe says. Forced “cleanup” grazing may damage the forage’s ability to come back and leave soil unprotected. It can take years to recover.

Sometimes it’s hard to see the changes, so Aljoe suggests visual evidence from the same “photo points” each year.

Take pictures at the peak and end of growing seasons, marking locations with a simple T-post or through a downloaded global positioning system (GPS) app.

“We had a producer that bought a degraded resource and through management planning he took it from poor condition to what we would consider excellent condition in just five years,” he says, noting the photos played a key role.

Aljoe shares those pictures with others, “to help them see what their future could look like.”

Doing something is better than doing nothing. Be consistent and only make it as complicated as you’re willing to stand, he says.

It can be as simple as these examples, or customized with free consultation from resources like the Oklahoma-based Noble Research Institute or the government’s Natural Resources Conservation Service.

A powerhouse cow can’t grow a calf of the same caliber without the grass to match.

Aljoe shared these tips for cattlemen at the 2020 Cattle Industry Convention in San Antonio.

Antibiotic resistance in cattle is a growing concern for producers and consumers. The goal for cattlemen and women is to implement strategies at the management level with good animal husbandry practices, routine health exams and vaccination.

The Resistance Part I: Works today, not tomorrow?

Antibiotic resistance. You’ve heard about it in the mainstream headlines, but this first in a two-part series covers the “why” it matters to animal agriculture and what cattlemen can do about it.