From a seller’s perspective, the fed-cattle trade continues to improve, with last week’s numbers making it the third straight week of higher prices since September 9th. Feeders gained a tighter grip on the trade with each passing day last week. Earlier sales in Kansas/Texas were made at $106/cwt. before giving way to $107/cwt. in Kansas later in the week. Northern packing plant locations are faced with fewer finished cattle to choose from, leading to some $109/cwt. trade in Nebraska up through Saturday morning, with $110/cwt. reported in few instances to top the market for the week.

However, feedlot break-even projections for the fall fed cattle market had targeted prices much higher than the current trading range.  It seems fairly safe to suggest that the feedlot sector continues to suffer at these price levels on a cash marketing basis.

We’ll further discuss carcass weights in a following segment but the snapshot of today’s scenario shows steer carcass weights up 5 lbs. in the latest data and heifers 1 lb. heavier on the week prior. Fed-beef production is being kept in check with the past four weeks of USDA reported head counts averaging 5,800 head fewer than a year ago.

Carcass cutout values have continued to erode since the mid-August supply disruption and, while intuition may argue against it, this is a very good thing for the beef complex. With packer margins narrowing, but still exceptional, thrifty boxed beef movement is a theme that will set the market up for a successful 4th quarter.

The subprimal pricing report last week reflects the downward price trajectory with Choice and CAB ribeye prices working higher against the trend.  The CAB rib primal was up $5.54 on the week while briskets were the only other net-positive primal in the report, up $1.98.

Market observers, whether casual or informed, may not realize that 4th quarter middle meat demand doesn’t encompass all loin cuts. Strip loins and top sirloin butts tend to face weaker fall and winter demand than ribeyes and tenderloins. End users and consumers can capture a value in these cuts during the 4th quarter as these two items should continue to cheapen into November, although top butts remain a bit pricier today coming off of the recent run-up.  CAB 0x1 strip loins are working toward bargain territory at a current $6.90/lb., wholesale.

Carcass weights are seasonally increasing with steer carcasses taking a big jump in the latest finalized USDA carcass report, up 5 lb. to average 896 lb., making them even with a year ago. Heifer weights increased just 1 lb. in the last report to average 823 lb., 2 lb. below a year ago.

The 2019 carcass weight trend line has run below 2018 levels almost exclusively since May. Some factors contributing to the lighter carcass trend include an incentivised harvest pace due to packer profitability and a positive cash basis for hedgers at key times. This, coupled with trailing effects from a wet year in feeding regions across three seasons, combines to keep steer/heifer carcasses 6 lb. lighter so far this year versus last.

CAB carcass weights are historically slightly heavier than the average of USDA steer/heifer carcasses. This is logical given that lighter carcasses will more often fall short of the brand’s Premium Choice marbling specification. Additionally, the brand’s smallest accepted ribeye size of 10 square inches restricts a small portion of otherwise eligible carcasses from making the mark. Heavier carcasses will more often have more days on feed and maturity within the boundaries of the “A maturity” requirement for the brand. 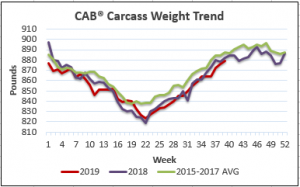 In the past five years, CAB carcasses have averaged a mere 5.8 lbs. heavier hot weights than all USDA fed cattle. Bear in mind that the CAB accepted carcasses are also included in the USDA average.

Carcass weights tend to reach their annual lows in late April and May, while the annual highs come in November. The exception to the latter came in 2017, when the high came a bit later in December. The range in CAB carcass weights from the annual low to the high has averaged 65 lbs. for the past five years. The all-time heaviest weights were in late 2015.

With November just ahead we’ll continue to see carcass weights continue to increase to the annual high. Although weights are bound to increase in the 4th quarter, the proportion of carcasses meeting CAB specs does not typically increase along a trend line correlating with heavier fall weights, with the recent exception of 2018. Therefore, we cannot accept carcass weights alone as causation to higher CAB acceptance rates. In fact, carcasses over 1,050 lbs. are most common during this period and are disqualified for CAB under the ten carcass standards setting 1,050 lbs. as the maximum acceptable weight. 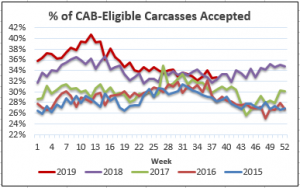 Over 90% of eligible carcasses that fall short of the CAB mark do so because of insufficient marbling.  As such, we have to look at physiological factors detracting from marbling achievement during the fourth quarter of the year.It is likely that age, nutritional background and the “type” of cattle on feed for late fall harvest dates are important to marbling levels observed during this period.

Consider that at least a share of the cattle placed on feed against fall finishing dates are not the absolute front-end of the genetic pool in terms of carcass quality. Some of these will be the non-performing, spring-born cattle roughed out in a long-yearling grazing program. Some are nondescript in their origin and breeding, pushing them to a management program where minimizing input cost is the only path to profitability. Yet that, in and of itself is not always a bad thing, as profitability comes in all shapes and sizes.

While age tends to be friendly toward marbling, to an extent, many of these cattle are simply not bred for optimal marbling potential from the start and a smaller share will achieve or surpass the “Modest 0” marbling required for CAB. 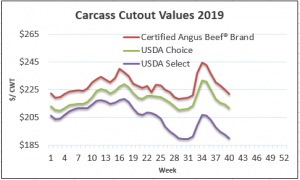 This creates opportunity in the marketplace given the diversity of the cattle supply. Feedlots and retained owners fortunate enough to ship cattle programmed for carcass success at the current time, given a value-based marketing method, continue to pick up a premium that heals a portion of the currently lower than anticipated average market price.

If winter holiday middle meat demand takes shape on time and as expected, the quality spreads that exist today should remain intact. We’ve made no secret of the Choice/Select spread in the $25/cwt. range that’s been unseasonally intact for weeks now. The CAB boxed beef spread above Choice is larger now than a year ago, just over $10/cwt. These factors should keep CAB carcasses worth nearly $100 per head premium to the carcass market average if marbling and demand remain near their current pattern into November.

Setting calves up for success 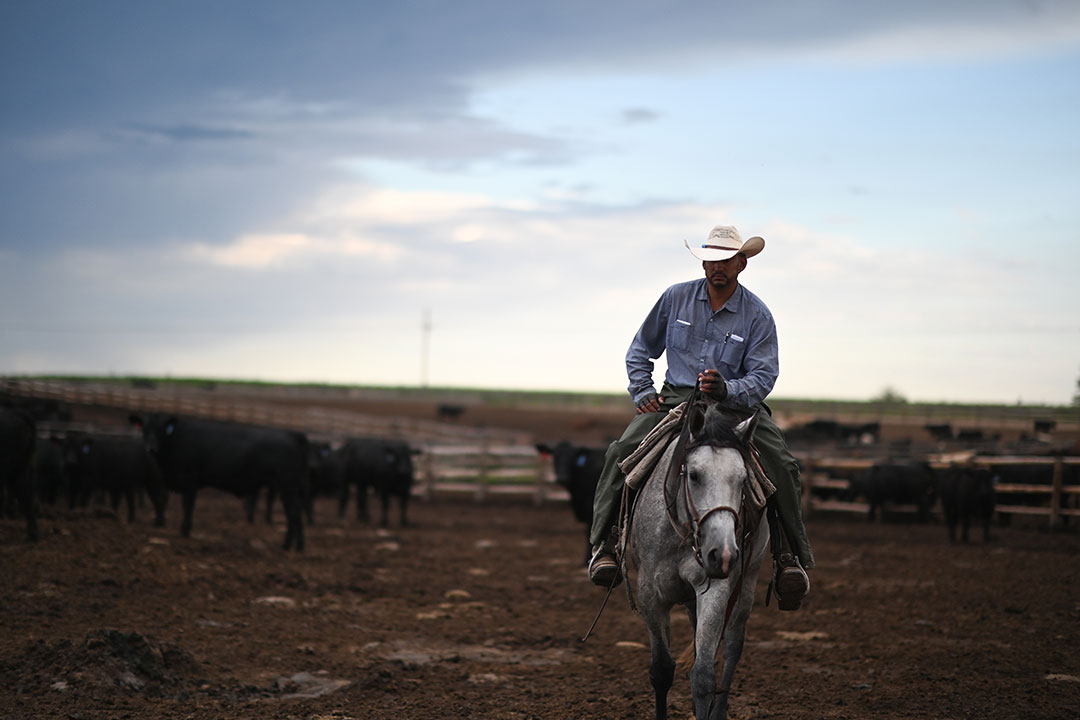 Own what you do 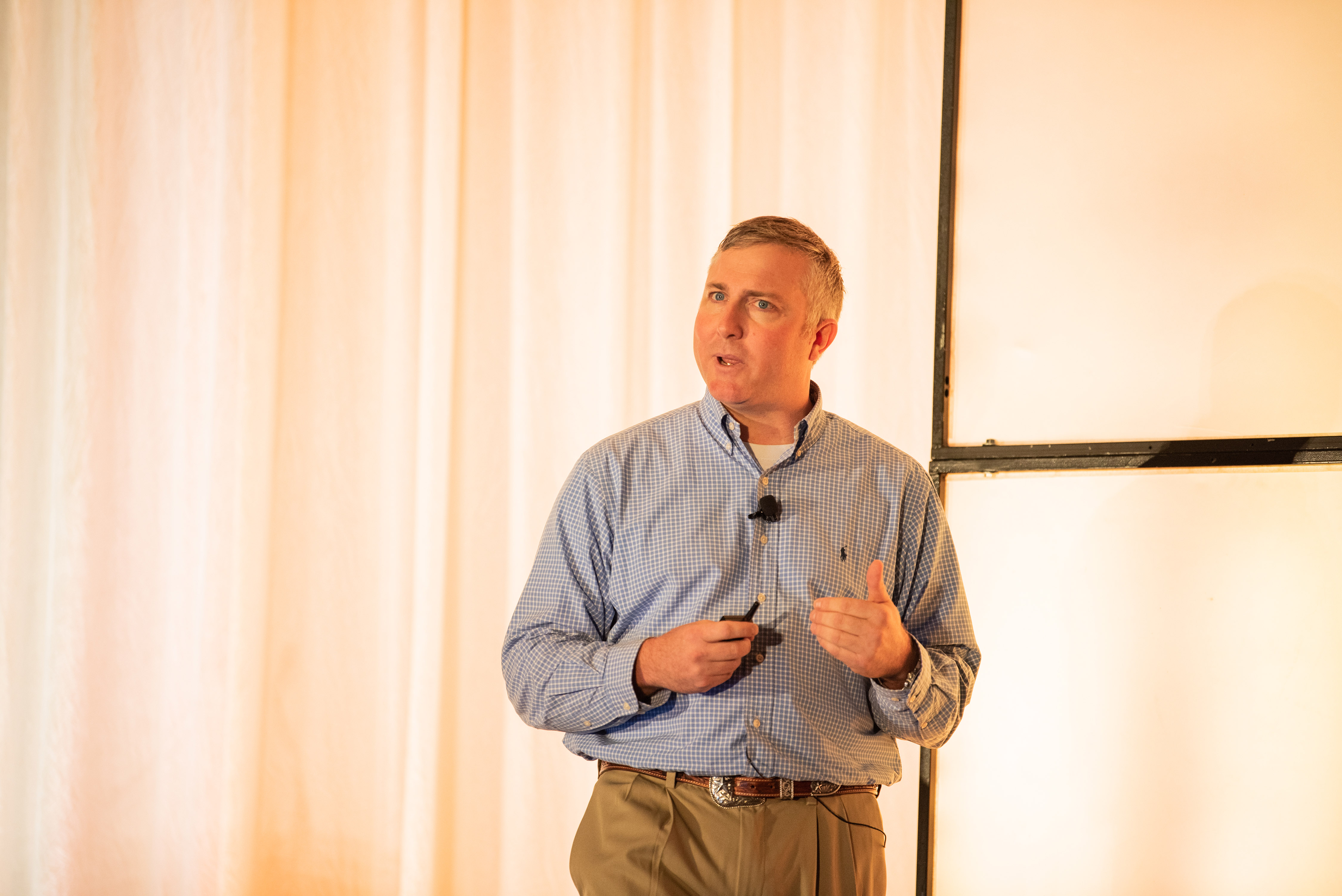