Carcass data that matters, Part I 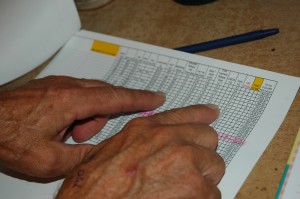 Carcass data. It’s both an awesome tool and, at times, an overwhelming puzzle piece that you just don’t know where to fit into your breeding and culling decisions.

That’s why we sat down with Paul to get the scoop on what really matters and what data should influence the future of your herd.

We broke his advice into two parts — the first related to Quality Grade and the second related to Yield Grade — and will share the conclusion tomorrow.

The first measurement Paul mentions? Marbling, of course. Those scores, along with the Quality Grades that are derived from them, are very important.

“Without marbling there isn’t much chance to produce a premium product,” Paul says. And with a decreased potential for premiums comes decreased demand from feeders and packers.

“The U.S. average for percent Choice is about 62%, with northern packers seeing closer to 75% on a frequent basis and Texas packers closer to 53%, on average,” he explains. “Therefore, depending on regional location, a producer needs to strive to beat those numbers by a large margin in order to have premium cattle.”

For some producers in the northern part of the U.S., this is a lofty goal since the benchmark is already so high. But, for Angus producers, it may not be high enough. Since the breed is so highly capable, it’s completely reasonable to shoot for 90 percent Choice or higher.

If the calf crop averages lower than 75% Choice, it stands to reason that improvements can be made and this should be a priority.  Likewise, the percentage CAB goal should be higher than 24%, and possibly 35% to 40% for a beginning goal.

These calves come from a long line of high-marblers.

Selection for bulls in the top 20% of the Angus breed for the Marbling EPD should help increase marbling in the cow herd and subsequent calf crops.  Since marbling is a highly heritable trait, stacking two generations of high-marbling genetics begins to make a big difference in the measurable results.

“When a ranch’s cattle can consistently produce much better than average quality grades, then the opportunity exists for that producer to either market that proven advantage to feedlots or retain ownership and sell carcasses on a grid directly to the packer for premiums,” Paul says.

Fortunately, selection for higher marbling can readily be done without negative impacts to other economically important traits.

Join us tomorrow for Part 2 of Paul’s advice on carcass data that matters.