As good as his word

Some statements are easy to make, harder to live.

“I hope I’m known as someone who keeps his word and does what I say I’m going to do.”

For Jerry Bohn, longtime manager at Pratt Feeders, it’s not a flippant remark, but an honest assessment of the career he’s had. It was never plastered on a wall or written in a planner, but it’s the motto he’s tried to model his life around, both personally and professionally.

“You don’t run a business for practice, so obviously making a profit and doing it right was important for us,” says Bohn, who recently moved into part-time retirement after 34 years at the helm of Pratt (Kan.) Feeders. “That allowed us to be successful because we did focus on doing things the right way, being honest and having integrity. We did what we said we’d do.”

Every time. No exceptions.

For his leadership to the beef industry and dedication to raising quality cattle, Bohn was named 2019 Feeding Quality Forum (FQF) Industry Achievement Award winner in August at Amarillo, Texas. Past recipients selected the honoree for the Certified Angus Beef LLC (CAB)-sponsored award.

“Being recognized by your peers is the ultimate compliment,” Bohn says.

During his tenure at Pratt Feeders, it grew from one yard operating at half capacity to as many as four, with an Oklahoma yard at Buffalo and other Kansas locations at Ashland and Hays (sold in 2014), with close to 120,000-head total capacity.

“It’s treated us really well, as far as the investment,” Bohn says. In 1980, local businessmen purchased the yard, but when Jerry brought his wife Julie and their young family to Pratt a few years later, he took immediate ownership in its success. Since then he’s literally bought into the company, serving on its board now with some second-generation stockholders.

“We had a lot of interaction, but at the same time they weren’t micromanagers,” Bohn says. “They laugh when I describe them as ‘bottom-line oriented.’”

He took his job seriously and personally: “Did everything always go well? No. Were their challenges? Sure.” There’s no sugar coating droughts like 2012 or winters like 1993.

“That was the worst of my career,” Bohn says. “And when you’re going through something like that you’re saying, ‘Man, did I really want to get involved in this?’”

“I don’t miss the day-to-day headaches, the weather and the markets dropping out,” Bohn says. “I do really miss the interaction with the customers.” 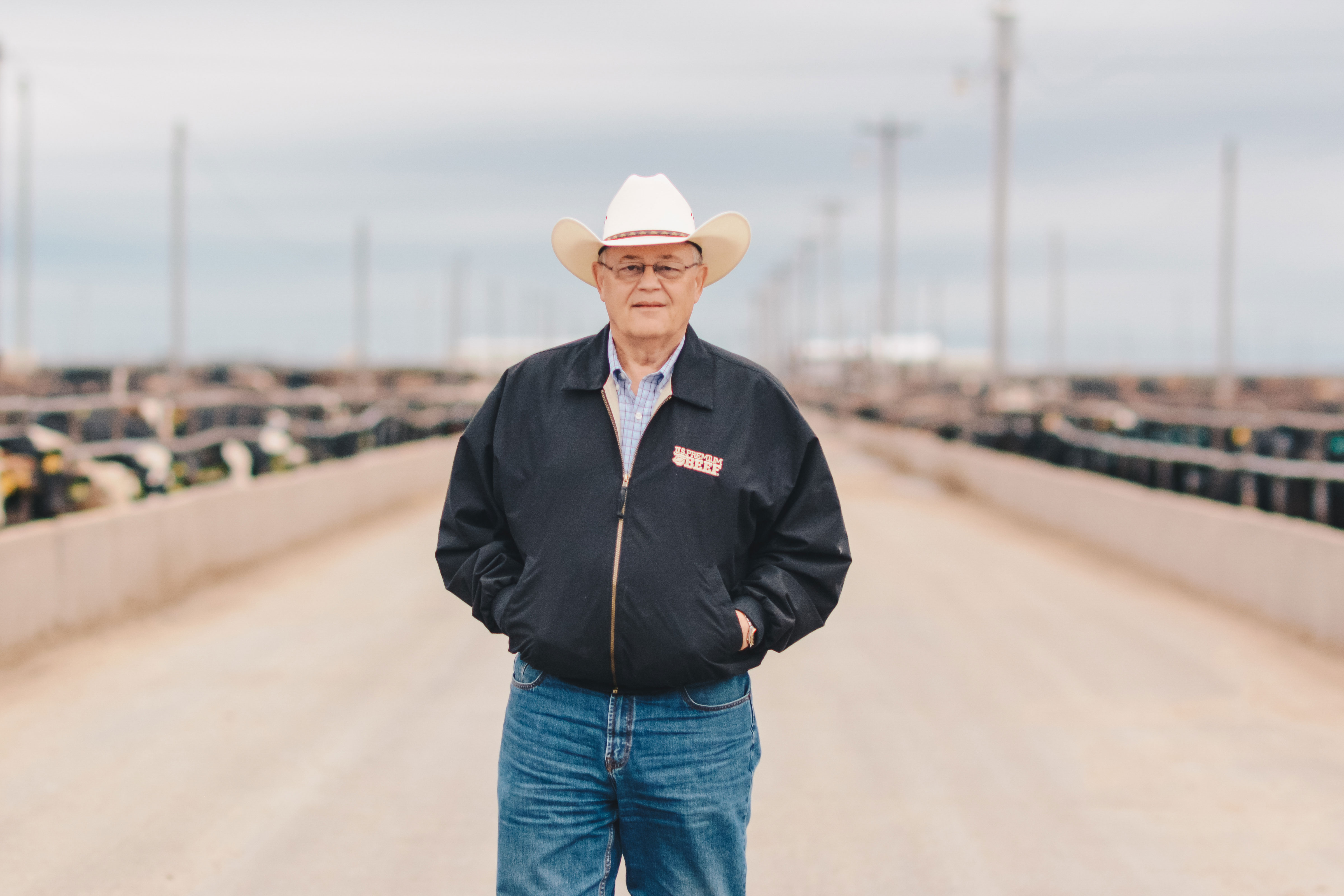 Florida, South Dakota, Kansas—the calls still come from across the country, even though he doesn’t have to relay marketing dates or pen conditions.

Bohn’s name was on the line, but everybody from pen rider to trucker to office clerk played a role.

“It takes a team to run an operation like this,” Bohn says. His 80-some employees probably knew him as particular, but level-headed and fair.

“Some of that I had to grow into,” he says. “You learn by doing. You learn by making mistakes and correcting them, and by surrounding yourself with good people.”

Bohn wanted his crew to do the work as if he were personally feeding, doctoring or loading each head himself.

Anything out of place at Pratt Feeders didn’t stay that way for long. If there was a way to improve, they were doing it.

The company was an early member of U.S. Premium Beef (USPB) and became a partner in the long-running CAB Feedlot Licensing Program in the early 2000s.

“It caused us to do a paradigm shift a little bit, with more focus on quality and we became more active in looking for ranch cattle, particularly Angus,” Bohn says. “It was something that we needed to do to change our direction.” 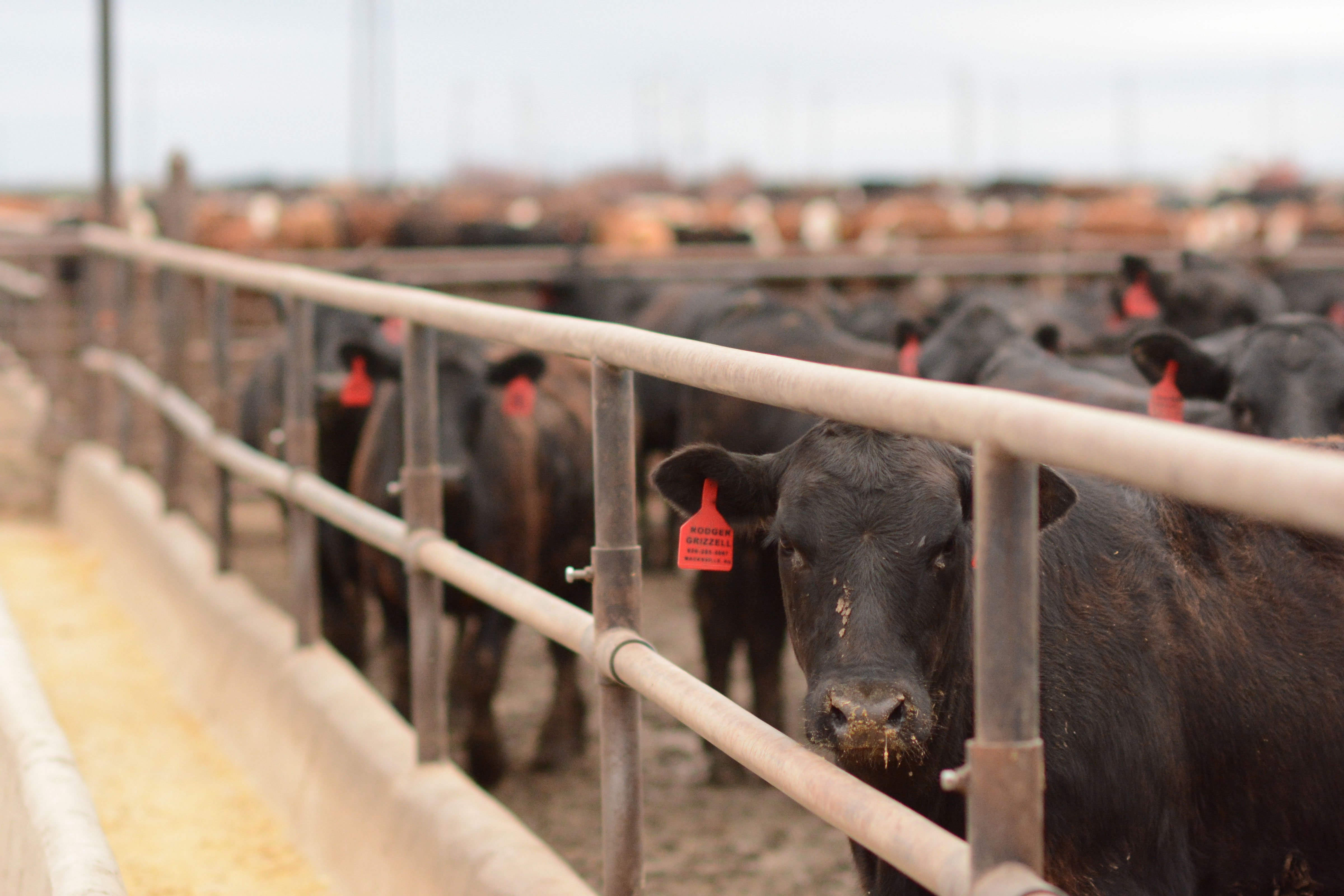 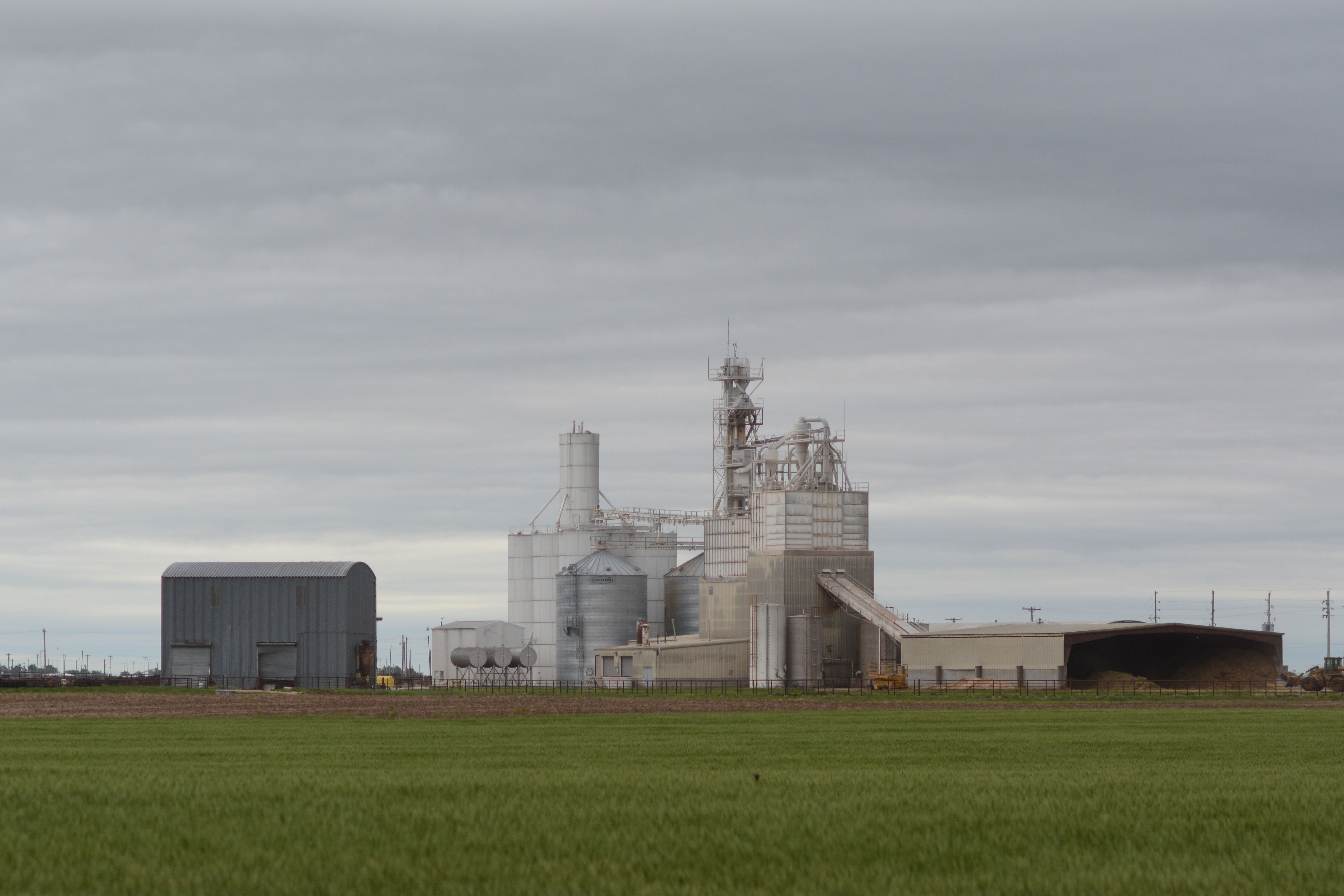 The industry is catching up, but Bohn set that in motion at Pratt nearly 20 years ago. That’s when his path crossed with Paul Dykstra, beef cattle specialist for the brand.

“Over time, working with Jerry personally and with the other managers in the Pratt group I really gained an appreciation for his analytical style and approach to business,” Dykstra says, remembering many meetings spent poring over data in the Pratt boardroom. “Together we measured the progression of carcass quality in the cattle they were feeding.  As the industry embraced carcass quality and what that meant for the economics of cattle marketing, Jerry was on top of that, finding better and better cattle as well as customers who wanted to feed the ‘grid kind.’”

The feeding company implemented individual animal management early on. Pens are still sorted into three or four outcome groups, each one marketed at an optimum finish.

“Today almost everything we sell is based on a grid,” Bohn says. “There’s a risk ratio when you get paid for actually what you have, and sometimes people didn’t really want to find out what they had. More of them are becoming comfortable with that and it’s a way that we can supply more quality to our end user to keep them coming back.”

Doing right for the cattle, the customer and the bottom line—it seems to come natural, but it wasn’t a mapped career path for the farm boy from Wabaunsee County, Kansas. He grew up baling hay, raising pigs, cattle and corn.

“You had to go out when it was raining and snowing and cold, and I guess it didn’t deter me enough that I decided I wanted something different,” he says. 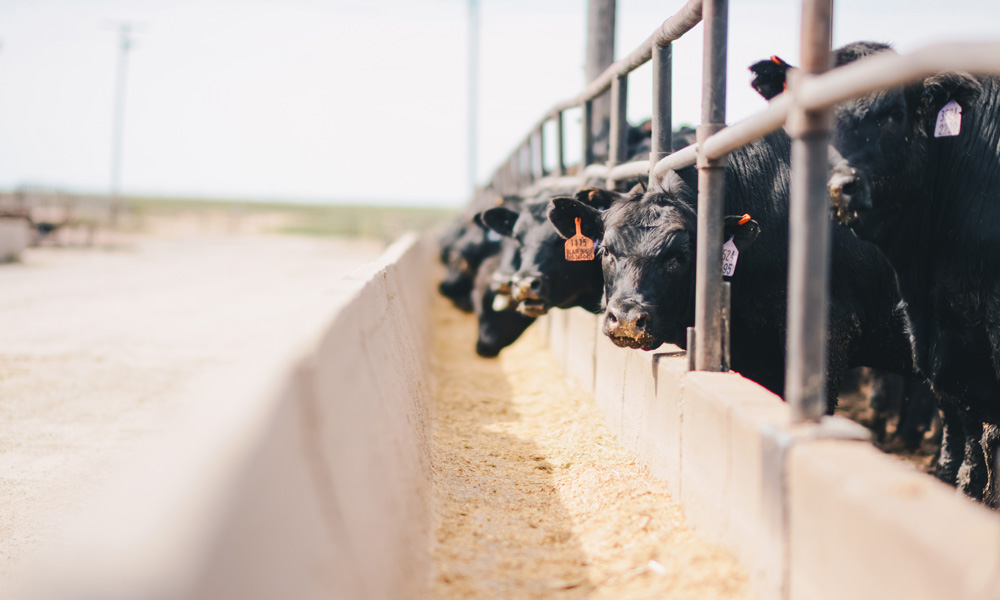 Thanks to an area farmer-turned-coach, Bohn judged livestock all over the country, his high school team winning the National FFA contest at the American Royal in 1968 and the National Western Stock Show the following year. That experience followed him to Kansas State University, where he competed under livestock judging coach Bill Able and earned his animal science degree.

That period also holds memories of a sorority girl who caught his eye, and a first date spent sledding. He and Julie will celebrate 47 years of marriage this fall.

“She’s been so supportive.” But he doesn’t have to say it; actions already tell that tale. Where he went, she followed.

The first stop was Austin, Minn., for a brief experience with Hormel before he was back in Kansas to fulfill a commitment with the National Guard. After a start in the feeding business with an eastern Kansas yard, he moved on to seven years as an analyst for CattleFax in the Denver area.

“I turned the Pratt job down once before we made the decision to come here. It was a hard move,” Bohn says. “When I first came, we

They raised three children in the bustling farm town, had a church family and were active community members. For 36 years, they called Pratt home.

“It was hard because our days here were relatively long, but as our children became more involved in school activities and athletics, we always tried to make an effort to be there,” Bohn says. There were days spent on bleachers and in 4-H horseshow barns. “It’s something you really have to focus on or you can let your work become the main focus.”

As a 21-year member and lieutenant colonel in the Guard, the cattleman had drill assembly once a month and two weeks of service in the summer. He wasn’t home for everything.

“My goal is to leave a legacy, not only for my family but also with my involvement in the industry,” Bohn says. “You owe it to the industry you’re involved in to work with it and promote it and be involved.”

He’s served as Kansas Livestock Association president and volunteered with the National Cattlemen’s Beef Association, which put him on track to become president there in 2021.

“I’m not sure that I thought when I came into this job here that we’d accomplish everything we’ve been able to accomplish,” he says. “It’s been a good career.”

He did what he said he was going to do…and then some.

Story and photos by Miranda Reiman 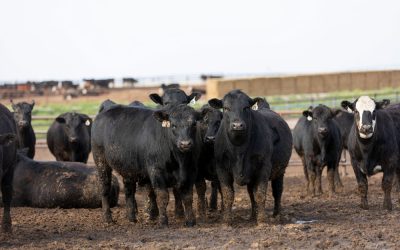 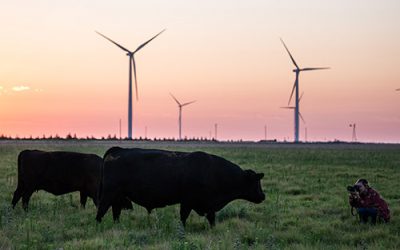 CAB summer intern Maeley Herring has a rich understanding of the cattle business and the heart to match. The Texas Tech University graduate will share cattlemen’s stories by drawing on her Texas family ranching heritage and personal experiences to connect people with ideas. 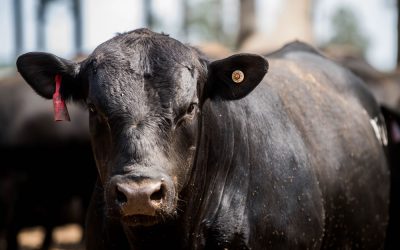 Breeders and bull studs use the Targeting the Brand™ logo to denote bulls that excel in the marbling EPD and the Grid Dollar Value Index. The genetic requirements were recently updated: so that commercial cow-calf producers better find sires that help them hit CAB brand specifications.